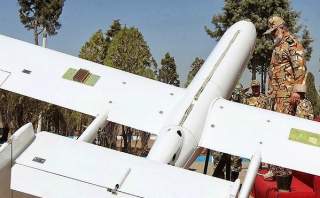 Iran tested its new “suicide” drone for the first time late last week, according to a senior Iranian military officer.

“The kamikaze drone was for the first time used in Mohammad Rasoulallah (Mohammad, the Messenger of God) maneuvers,” Pourdastan said, referring to the military drills, state-owned Iranian media outlets reported. “The drone can be used for hitting the aerial and ground targets and can carry out an attack when it identifies a suspicious target.”

Pourdastan first announced that the Iranian army had developed a “new type of suicide drone” back in September 2013, which he referred to as the Ra'ad 85 (Thunder 85).

At the time, Pourdastan claimed “This drone is like a mobile bomb, and is capable of destroying fixed and mobile targets,” including enemy helicopters. He also said that the drone was being produced in different sizes in order to target and destroy different kinds of targets. Elsewhere, Iranian press outlets reported that the Ra’ad 85 had a range of about 100 km.

However, the drone was widely mocked by foreign experts in October 2013 after Iranian TV stations first aired video displaying the the unmanned aerial vehicle (UAV). The drone in the video was reportedly patched with duct tape in various areas, prompting many to dismiss it as an “an amateurish project.”

Nonetheless, Iran has sought to incorporate UAVs into its armed forces, and placed an especially high premium on developing an indigenous UAV industry over the past decade. Although Iran’s “indigenous” UAVs often appear to be modeled off of foreign drones, Tehran has an increasingly wide-range and sophisticated domestic drone industry. As The National Interest noted earlier this month, Iranian officials appear eager to begin exporting some of these UAVs.

The use of the Ra’ad 85 as a “mobile bomb” is consistent with Iranian military doctrine, which relies in part on using asymmetric capabilities to deter adversaries with vastly superior conventional military power. Indeed, in many ways it appears Iran intends to use the Ra’ad 85 in particular, and its fleet of UAVs more generally, in a fashion similar to its swarming speedboats. Iranian naval officials have regularly suggested these speedboats might be used as mobile bombs in kamikaze attacks against U.S. naval assets in the event of a war.

In any case, the first test of the Ra’ad 85 has been a long time coming. Shortly after Pourdastan first revealed the drone’s existence in September 2013, Iranian army officials claimed that the drone would be used in Army drills scheduled to take place between October and November of last year. Then, in May of this year, Pourdastan announced that the kamikaze drone would be tested sometime in 2014.

The Ra-ad 85 was tested as part of the week-long joint military exercises that are scheduled to conclude on December 31. Iran’s Army, Navy and Air Force are all reportedly participating in the war games, which allegedly cover an “area of 2.2 million square kilometers (850,000 square miles) stretching from the east of the Strait of Hormuz to the southern parts of the Gulf of Aden,” according to local press reports. On Monday Iran’s naval chief told an Iranian Arab-language news outlet that “the drill has a message of friendship and peace for all neighboring countries in the region and even extra-regional countries.”