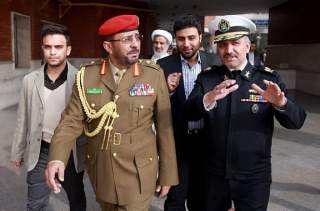 Last week’s visit by a senior Omani defense delegation to Tehran suggests that Muscat’s policy of friendship toward Tehran is determined. That said, some of the statements made by Iranian military officials cannot but trouble the Omanis as to what Tehran is hoping to secure from the closer relations.

The Omani delegation was led by Major General Salim bin Musallam Qattan, the head of Oman National Defense College. Among others, Qattan met with Iranian Navy Commander Rear Adm. Habibollah Sayyari and Lieutenant Commander of the Islamic Revolution Guards Corps (IRGC) Brigadier General Hossein Salami. Salami was not far from the truth when he said that “no negative point has ever existed in relations between the two nations.” While Oman is a member of the otherwise staunchly anti-Iran Gulf Cooperation Council (GCC), Muscat has been the one GCC member that has strived most to keep its ties with Tehran cordial.

Putting this reality in both historical and geographic context is important. Oman’s good relations with Iran predate the Islamic Republic by some margin. It was the pro-American and secular Shah of Iran who in the early 1960s to early 1970s came to Oman’s aid in combatting a communist insurgency in Oman’s Dhofar region. The Shah sent some 4,000 troops as part of that successful military campaign, an intervention that the Omanis remember fondly to this day.

At the same time, Oman has often times felt apprehensive about the regional policies of its other large neighbor, Saudi Arabia. In Omani eyes, cordial ties with Iran gives Muscat’s foreign policy balance. In December 2013, the Omanis warned the other GCC members that they would abandon the bloc unless it gave up on a Saudi-led push to militarize the organization.

But this Omani position does not lessen Muscat’s desire to maintain close ties to the United States. Omani-American defense ties are strong. The US military has access to military facilities in Oman and the flow of American arms to Oman is ongoing, including the sale of F-16 multirole aircraft. In fact, the future of Iranian-American relations likely will be the most important determining factor for how far Muscat will be willing to push ahead with its policy of cooperation with Tehran.

That’s why Rear Admiral Sayyari’s message last week should have captured most of the attention. While pointing out that navies from Iran and Oman visit each other’s ports on a monthly basis, he had a not-so-subtle message for Washington.

“All the interaction and cooperation between Iran and Oman is in line with maintaining permanent security in order to make others understand that Iran and Oman are capable of providing security for the Sea of Oman and the Strait of Hormuz and there is no need for the presence of others, Sayyari said. While General Major Qattan smiled it off, this sort of Iranian brinkmanship vis-à-vis longstanding allies of the US, including Oman, only hurts Iran’s regional case.

It was in September 2013 that Iran and Oman signed a memorandum of understanding (MoU) to boost their mutual cooperation in the defense sector. The agreement was signed in Tehran by Iranian Defense Minister Hossein Dehqan and his counterpart Badr Bin Saud Bin Harib al-Busaidi.

Dehqan made it clear that Iran was hoping to replicate this defense arrangement with other countries. “We should try to spread this trend to other regional countries,” Dehqan said at the time. This is a sentiment that the Iranian officials frequently express. Mohammad Saleh Jokar, a member of the Iranian parliament’s National Security and Foreign Policy commission said last week that “The Persian Gulf countries should come to realize that mutual cooperation among the regional states is much more effective in the establishment of stability along joint borders.”

This approach by Tehran that in essence asks its neighbors to choose between Iran and the US is a self-defeating policy. While Tehran sees less American military footprint in the Persian Gulf as adding to its security and regional role, all the GCC states—irrespective of their internal differences—hold the opposite position. And Iran, at least for now, is not in a position to overturn that basic reality as far as Gulf Arabs are concerned.

According to Rear Admiral Sayyari, the Iranian and Omani navies are next to stage joint war-games in Persian Gulf waters for three days from 7 April. In the meantime, in order to prevent an Omani rethink about the country’s Iran policy, the top military brass in Tehran would be wise to think twice before asking US allies in the region to walk away from Washington in return for mere promises.