Five Ways Trump Can Dominate Everything 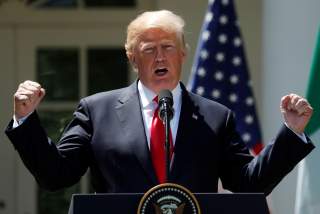 With the resignation of Justice Anthony M. Kennedy, Donald Trump has fresh wind in his sails. As he prepares to nominate a second Supreme Court Justice and to head to two big foreign-policy summits as well as travel to the United Kingdom, Trump is on something of a rebound from his crisis at the border last week. Writing in CNN, the Princeton University historian Julian Zelizer argues that Democrats have badly underestimated Trump: “The possibility for President Trump to seriously transform American policy keeps growing and the potential for a two-term presidency can no longer be dismissed. This unstable, shallow television star is starting to demonstrate that he has some very real political muscle to keep pushing forward.”

First, trade. After declaring that trade wars are “easy” to win, prudence appears to winning out over bellicosity, at least when it comes to China. For now, Treasury Secretary Steve Mnuchin seems to have the upper hand. Trump backed off his most draconian threats towards China. He might also ponder that British prime minister Theresa May is desperate to strike a trade accord with America to avert the worst effects of Brexit. In June, she explained her dismay at the steel and aluminum tariffs that Trump had imposed on Britain and the European Union. According to her, “I am deeply disappointed at the unjustified decision by the US to apply tariffs to EU steel and aluminum imports. The US, EU and UK are close allies and have always promoted values of open and fair trade across the world.” She pleaded for a permanent exemption. Trump should push for a bilateral trade deal that is attractive to the UK.

Second, NATO. Trump can easily dominate the upcoming NATO summit either by blowing it up or by turning it into a success. This past Thursday, Trump met with NATO Secretary-General Jens Stoltenberg and told him “Germany must demonstrate leadership in the alliance by addressing its longstanding shortfall in defense contributions.” Trump clearly sees the allies as a bunch of moochers who have been exploiting American largesse. The mood in Europe is grim, with allies openly questioning Trump. But this provides the perfect setting for Trump to upset expectations of a tense summit. As with trade, his demands have put him in an effective bargaining position—if he chooses to use it. The man who boasts about the art of the deal has a chance to show that he can deal artfully with Europe.

Third, Russia. Trump can burnish his foreign-policy credentials when he meets Russian president Vladimir Putin in Helsinki on July 16. Trump has displayed deft public relations skills in meeting with North Korean dictator Kim Jong-un and now Putin. Trump does not appear to have emerged with an agreement that will actually prompt North Korea to denuclearize, but the meeting did allow him to back off his fire and fury threats and make it look as though he was achieving peace, or at least a pause in hostilities. Congress has crimped Trump’s ability to lift sanctions. But Trump will likely seek to push for progress on Syria and Ukraine. If he can return with an agreement that let’s him start pulling out troops from Syria, it will be greeted with hosannas by his base, no matter what Beltway elites may say.

Fourth, Iran. Right now, Trump is pursuing a very hard line against Iran indeed. The decision of Russia and Saudi Arabia to increase oil production while the Trump administration is seeking to drive Iranian exports to “zero” could also force Tehran into a more conciliatory posture. Maybe Trump will be able to emulate Ronald Reagan and watch as Iranians rise up an overthrow the regime. Another path forward would be a new Iran agreement. Such a move would allow him to perform an end run around his critics. If Trump were to seal a détente with Tehran, he would be could go down in history as the great peacemaker.

Finally, Trump’s opposition. In seeking to bolster his presidency, Trump can count on the fact that he is driving his foes bananas. They’ve started to advocate the political equivalent of Defcon 1 measures to counter his administration. A case in point is an article in the Huffington Post titled “Hey, Democrats: Pack The Court.” It recommends “expanding the Supreme Court bench to 11 justices under the next Democratic president. Other reforms, including term limits to remove aging conservatives, may well be appropriate.” How would reforms target “aging conservatives” alone and not “aging liberals”? The author does not seem to consider that the next Republican president could emulate a Democratic predecessor and pack the court again, raising the number of justices to fifteen or more.

Is a Trump success guaranteed? Not a chance. Perhaps Trump will drive the economy into recession, or even depression, by pulling out of the World Trade Organization or by embarking upon a calamitous war with Iran. Maybe it really will be America alone if Trump blows up our alliances in Europe and Asia, while antagonizing China.

So far, however, his turbulent presidency is already more influential than many of his adversaries ever dreamed it would be. Once upon a time liberals dismissed Ronald Reagan as an “amiable dunce.” History rendered a different verdict. If Trump scores some successes in coming months, his improbable presidency could prove to be a Waterloo for his detractors.