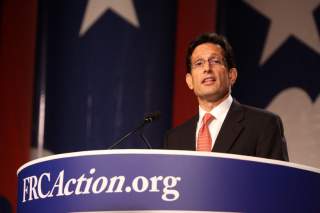 There must be something in the water at Randolph-Macon College in Ashland, VA. Two professors from that institution will square off to fight for Rep. Eric Cantor's seat--David Brat, who polished off Cantor in the primary, and Jack Trammel. Each is an author. Brat has published such works as God and Advanced Mammon – Can Theological Types Handle Usury and Capitalism?” Trammel is the author of Down on the Chickahominy: The Life and Times of a Vanishing Virginia River. The institution's president has voiced his pride at their accomplishments: "“Randolph-Macon College is blessed to have remarkable faculty and staff members who are passionate about their students and about making significant contributions to our society. We are proud of both Dr. Brat and Dr. Trammell for their desire to serve our country and we wish them both the best of luck in November.”

Cantor, as of this writing, does not appear to share that magnanimous sentiment--word is that he has not deigned to call and congratulate Brat for playing David to his Goliath. Perhaps Cantor, who managed to rack up $168,367 in bills at steak houses (only slightly less than Brat spent on his entire campaign), is busy enjoying a last meal with his staffers. Brat deserves kudos for a stunning victory. He had only two paid staffers on his campaign and his manager is 23-years-old. According to the Los Angeles Times, "Ultimately, the second-most-powerful Republican in the House and potential speaker-in-waiting lost to a campaign run by political novice armed only with a Wal-Mart flip phone."

Cantor tried to depict Brat as a liberal professor--all that was missing was an ad denouncing him as a member of the "cultural elite"--but that dog wouldn't hunt. Virginians, suspicious of Cantor's bona fides when it came to immigration reform, went for the Tea Party candidate. It was Brat who said that Cantor was in "cahoots" with Democrats for suggesting that the children of illegal immigrants should be able to obtain legal status. In the end, for all the handwringing about the role of money in elections, it didn't do much for Cantor to spend millions. Instead, the conservative activists such as L. Brent Bozell who backed Brat emerged victorious. Other Tea Party candidates are drawing sustenance, including in Tennessee and Kansas.

Who are the national winners and losers of this Cantor's ouster besides the hapless candidate himself?

One winner is Sen. Rand Paul. The upset victory is only upsetting for the GOP establishment. It demonstrates that the Tea Party remains a powerful and effective grassroots force that party leaders ignore at their peril. Paul can draw upon its adherents for the presidential primary--though Sen. Ted Cruz may also feel emboldened. But Paul can also present himself as the most reasonable member of the Tea Party faction. The wilder things become in the House, the more seasoned he may look nationally.

The loser--other than House speaker John Boehner--has to be former Florida governor Jeb Bush. Bush has taken proleptic steps at trying to reshape the GOP into projecting a more moderate image on issues such as immigration. Now he may well conclude that the party is too riven by internal fissures to be welded back into a whole, prompting him to abandon the idea of running for the party nomination. The question the party itself faces is whether it will head toward civil war. For the ouster of Cantor is also bad news for what have become known as the "reformicons"--the reform conservatives at National Review and National Affairs magazine, who hope to reinvigorate the GOP nationally.

For now, Brat can bask in his victory and enjoy debating his colleague and political rival professor Trammel about fiscal responsibility, immigration, and perhaps even the future of the 87-mile-long Chickahominy river.