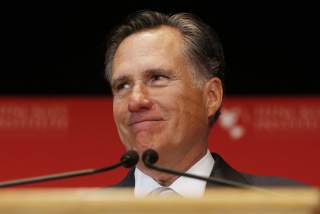 Mitt Romney is back. Apart from a fairly diffident op-ed in the Washington Post about Trump, Romney has been mostly MIA since he entered the Senate in 2018. But the Trump Ukraine scandal appears to be reanimating him. Will Romney lead a crusade to topple Trump and restore the old guard of the Republican party?

In a tweet on Friday, Romney rebuked Trump in no uncertain terms. According to Romney, “By all appearances, the President’s brazen and unprecedented appeal to China and to Ukraine to investigate Joe Biden is wrong and appalling.” In a separate tweet, he noted, “When the only American citizen President Trump singles out for China’s investigation is his political opponent in the midst of the Democratic nomination process, it strains credulity to suggest that it is anything other than politically motivated.”

Romney’s move is significant. Until now, most Republican Senators have either defended Trump, as Ron Johnson did, dismissed Trump’s remarks as unserious, as Marco Rubio did, or simply tried to remain silent about them. The only other Senator to criticize Trump was Ben Sasse, who declared, “Americans don’t look to Chinese commies for the truth.”

These remarks will hardly come as a welcome development to Trump. So far, Trump has reacted to the prospect of impeachment with palpable anger and fear. A number of commentators have speculated that Trump’s panic stems from the fear of the stain of impeachment rather than the prospect of being driven from office. After all, he knows that the Senate would never vote to convict him. But Trump’s apprehensions may actually be justified. The presumption that the Republican Senate would not turn on Trump rests on a shakier foundation than is commonly assumed.

Here’s why. For one thing, impeachment is an unpredictable process. Romney's blast was unexpected and provides cover for other Republicans to abandon Trump. It's also the case that Republican Senators might end up having a number of reasons for dumping Trump. The first and most obvious is that they will look to preserve their own seats before seeking to assist Trump. If Senate Majority Mitch McConnell decides that the costs of protecting Trump exceed the electoral benefits, he would not hesitate to jettison him in a heartbeat. The second is that throwing Trump overboard might well accelerate the political futures of a variety of Republican Senators, ranging from Rubio to Josh Hawley, who view themselves as presidential timber. If Trump were reelected in 2020, they would have to wait another four years to run for the presidency. If he’s ousted now, then they might well be able to run sooner.

Romney would be the perfect stalking horse for any nascent Republican faction hoping to banish Trump. Ever since Trump defeated the GOP establishment, the NeverTrump movement has been searching for a figurehead to oust Trump, first as the Republican candidate, then as president. Romney may have lost to Barack Obama, as Trump never tires of reminding him, but he continues to command credibility among the business wing of the GOP.

Whether Romney has the cojones to lead a revolt against Trump remains an open question. He has questioned Trump before only to be swatted away by the president as a nettlesome insect. In March 2016, for example, he called Trump a “con man” whose economic and foreign policy would lead to disaster. But then Romney had met with Trump in November at the Jean-Georges restaurant in the Trump Tower and auditioned for the Secretary of State position. Trump, who humiliated Romney by dangling the post without any intention of giving it to him, may come to have regret for his open disdain for him. Trump served Romney frog’s legs at their dinner. As he contemplates the future of the Trump presidency, Romney surely knows that revenge is a dish best served cold.