Obama's Dangerous Scandal At the VA 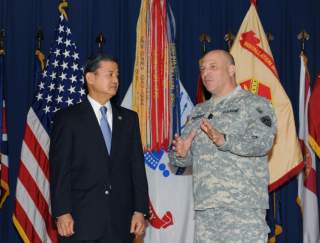 The surprising thing isn't that Veterans Affairs Secretary Eric K. Shinseki resigned today but that he didn't do so sooner. Like Kathleen Sebelius, he is another Obama administration appointee who simply lacked the management skills to run a large organization. He charitably described himself as "too trusting."  But his resignation itself won't shield President Obama himself from the political fallout of what appears to be a real scandal at the VA as opposed to the manufactured one of Benghazi. With 42 VA hospitals under investigation for falsifying patient records, Democrats are rightly worried that this debacle, which signals a lack of accountability and big government running amok, will severely damage their electoral fortunes in November.

For Shinseki himself it is a poignant end to what was a distinguished career that began in the jungles of Vietnam, where he was twice-wounded, and ended in the almost equally dangerous environment of Washington. He garnered attention in 2003 when he flatly dismissed the notion before Congress that postwar Iraq would be a cakewalk to govern. His remarks sent the Bush administration into overdrive to debunk him. Defense Secretary Donald Rumsfeld said in a news conference, "The idea that it would take several hundred thousand U.S. forces I think is far off the mark," In one of his most notorious appearances on Capitol Hill, deputy defense secretary Paul Wolfowitz declared that Shinseki had it all wrong. According to Wolfowitz,

We have no idea what we will need until we get there on the ground. Every time we get a briefing on the war plan, it immediately goes down six different branches to see what the scenarios look like. If we costed each and every one, the costs would range from $10 billion to $100 billion.

To his credit, Shinseki did not back down from his remarks. He was essentially frozen out for them by the Bush administration. Shinseki became a hero to the left. Obama sought to rehabilitate and reward him for the mettle he had displayed by appointing him head of the VA. It was an imprudent choice. Shinseki didn't turn out to be a bad man but an incompetent one.

The real question that lingers on is why Obama named him in the first place, apart from trying to settle a score with the Bush administration. Perhaps there was more to it than that. Washington Post columnist Dana Milbank observed, "If Obama wants to resolve this VA debacle, he’ll need a less passive secretary." But that passivity is itself of a piece with much of Obama's presidency. Obama, who denounced the Bush administration as a senator for its failures to run the VA properly, appears to have ignored its mounting problems as president.

Already conservatives are pointing to the numerous inconsistencies in his statements as a Senator and President. Now Obama's insouciance means that he faces what may be the gravest peril to his presidency and his party's political fortunes. Obama said he "reluctantly" accepted Shinseki's resignation, but the reluctance is misplaced. Reform--and an examination of what went wrong--is overdue. Though Shinseki may be gone, the administration's woes have just started.