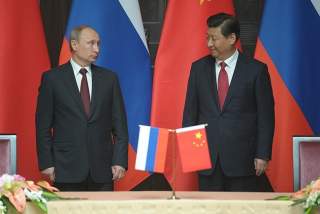 There will be plenty of hyperventilating about the gas deal between China and Russia. It signals the end of the old geopolitical order. A new cold war has begun with Russia and China allied, once more, against Washington. And so on. Not so fast.

Start with the deal itself. It remains unclear what China and Russia agreed to when it comes to specific terms. Alexei Miller, the head of Gazprom, says the price of the gas is a "commercial secret." Did the Chinese take an eager Russian president to the cleaners? Or will they simply defer on the issue of price, with the Chinese figuring that Russia will become even more eager to lower the price if it comes under increased western sanctions?

Still, the deal does mark something, which is to say that it signals another shift on the road to a new geopolitical constellation--one in which the U.S. figures as the target of joint Russian and Chinese ire. It's another move away from the triumphalist spirit that flourished in America after 1989. Then it seemed, or was supposed to seem, as though Washington could do whatever it wanted wherever it chose. No longer. What realists predicted would occur is indeed occurring. American preeminence is triggering a balancing coalition.

The deal allows Putin to conduct his own pivot toward Asia. It allows him to ameliorate the economic damage caused by sanctions. It allows him to thumb his nose at Europe and President Obama. And it allows him to further restore national pride in Russia as an independent actor rather than the supplicant of the West, as it was during the Yeltsin era.

If the deal is good for Russia, it may even be better for China. Beijing won't ally itself firmly with Moscow. Instead, it will likely seek to play the role of honest broker, manuevering between the Moscow and Washington. Right now, the U.S. has a lot more to offer. But playing the Russia card gives China increased flexibility.

For the U.S., the deal, coming right after Attorney General Eric Holder announced charges against members of the Chinese military for cyberspying, is a reminder that its influence abroad is waning. This is not a result of pusillanimity by President Obama. It is a consequence of the failure of Washington to recognize that the hubris--epitomized most recently in Senator John McCain's comment that Russia is a "gas station masquerading as a country"--that took hold after 1989 continues to vitiate rather than strengthen American power.