The Peculiar Case of Paul Wolfowitz 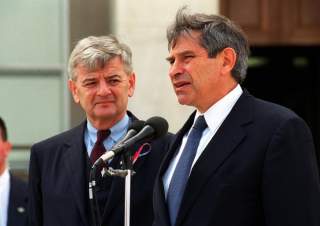 Look who's back: Paul Wolfowitz, who was deputy secretary of defense in the George W. Bush administration, resurfaced yesterday on NBC to declare that not only was he not an architect of the Iraq War, as Chuck Todd had introduced him, but that, in any case, it was time to let bygones be bygones when it comes to Iraq and look to the future, and, heck, that if President Obama rescued Iraq from itself, why, then, he could claim lots of credit for being a fine leader. That statement sounds lofty but was, of course, self-serving since it is Wolfowitz and Co. who created the disaster when they insisted that it was necessary to topple Saddam Hussein in 2003, who championed what George F. Will correctly refers to as the  "ruinous grandiosity" of Bush's "freedom agenda" in today's Washington Post.

But as Andrew Sullivan observed, perhaps Wolfowitz's most remarkable statement came a bit further into the interview. Wolfowitz contended that it was preposterous to try and make distinctions about the Middle East to the American people:

We should say al Qaeda. ISIS sounds like some obscure thing; it’s even more obscure when you say Shia and Sunni … It means nothing to Americans whereas al Qaeda means everything to Americans … My point is that these are the same people, they are affiliated with the same people, who attacked the United States on 9/11 and still have an intention of attacking the United States and attacking Europe …

Well. At least Wolfowitz is remaining consistent. The core of the problem in the run-up to the Iraq War was that Wolfowitz and his chums consistently claimed that Saddam Hussein was in cahoots with Osama bin-Laden. Any distinction between the two, we were told, was otiose. Saddam was preparing, or had already prepared, suitcase bombs for al-Qaeda to smuggle into the U.S. And so on.

But there is even more to Wolfowitz's statement than that. The crowning irony of his remarks is the deep contempt that they display for the American public and democracy. Again and again, Wolfowitz made it plain that he doesn't believe it has the capacity to comprehend the Sunni-Shia division. An incredulous Todd pointed out that it's been at the heart of Muslim disputes for a thousand years. Wolfowitz waved it away. Too abstruse for the rubes, he indicated. The neocons purport to want to export democracy to the rest of the world. But Wolfowitz's comments indicate a dismissive attitude toward it at home.

Overall, however, Wolfowitz's appearance had a tired feeling. The neocons are ginning up the war machine once more, but their tactics have become threadbare. It has the feel of an old rerun. As I note in Politico, the public that Wolfowitz apparently scorns isn't tuning in.

Anyway, as Gen. Martin E. Dempsey, the chairman of the Joint Chiefs of Staff, noted before the Senate yesterday, the notion, which the neocons, among others, are promoting, that a U.S. troop presence would have saved Iraq from its current predicament is bogus. The problem isn't America. It's Iraq. Maybe America could have delayed the process of Iraq succumbing to its fissiparous tendencies. But Washington could not have prevented it indefinitely. Wolfowitz mentioned South Korea as a model for Iraq, but do we really want to have troops stationed there indefinitely? A recent Pew poll indicates that a record 53 percent of the American public believes that the U.S. should "mind its own business" internationally. Perhaps they are wiser than Wolfowitz and the other self-anointed strategic experts whose wisdom decreed that the U.S. not only enmesh itself in intractable conflicts abroad, but also exacerbate them.