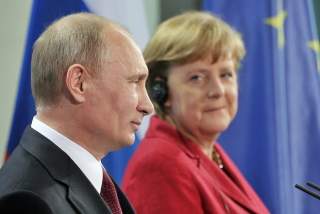 Is there a new Berlin-Moscow axis developing? A few weeks ago Gerhard Schroeder, the former German chancellor who serves on the board of Gazprom, was photographed giving Russian president Vladimir Putin a bear hug. Another former Social Democratic chancellor, Helmut Schmidt, declared in the weekly Die Zeit that the uproar over Putin’s expropriation of the Crimea was so much piffle. It was, he said, “entirely understandable.” And the German public itself has no appetite for confrontation over Ukraine.

All this is creating some consternation inside and outside Germany among foreign policy elites. In today’s New York Times, for example, Clemens Wergin, who is an editor at the conservative daily Die Welt in Berlin, reports that a love affair is developing between Germany and Russia. A few days earlier, John Vinocur, writing in the Wall Street Journal, came to similar conclusions: "we have a chancellor who—regardless of Germany's participation in new sanctions, or German officers being held captive by pro-Russian separatists—has spent much of her time since Russia's annexation of Crimea waiting on the phone to Moscow for positive signals from Mr. Putin."

The gist of their argument seems to be that Germany is reverting to type. Now that the cold war is over, it's looking east rather than west, much as it did during the 1920s, when it signed the Rapallo pact. Vinocur notes that the historian Heinrich August Winkler recently wrote an essay in Der Spiegel deploring Germany’s drift. He sees “new doubts about Germany’s calculability.” Wergin would seem to agree. He says, “We have come to think of Germany as a Western European country, but that is largely a product of the Cold War. Before then it occupied a precarious middle between east and west. Now Germany may well be drifting away form the West again.”

He has a point. The roots of this antipathy toward Washington are largely based in a left-wing, pacifist tradition in Germany that emerged full flower during the cold war. With the Vietnam War, America came to be seen as the bad guy in Germany. The student left revolted as much against America as against its parents. America was seen as the patron of nasty regimes such as the Shah’s Iran. It was, so the thinking went, conducting genocidal warfare in Vietnam, much as it had against the Indians. Then came peace movement of the 1980s, when the Reagan administration was seen as the real threat to peace in Europe. Germany, which aspired to become a new Switzerland, rebelled against the notion that it would become the battleground for a confrontation between the two superpowers. Schroeder, on the eve of the Iraq War, and himself a graduate of the peace school of the 1980s, was able to act upon those impulses by withholding German support for the war, thereby ensuring his reelection in the fall of 2002.

Today such sentiments have been given a boost, ironically enough, by President Obama’s policies. The candidate who was hailed near the Brandenburg Gate by rapturous German crowds and the president who was supposed to usher in a new era of global peace? Gone. He’s been replaced by the image of a Predator missile happy president who authorizes extensive spying on the German public, including its current chancellor. America’s name, by and large, is mud in Germany, at least when it comes to foreign policy.

Many of these sentiments are quite nicely summed up by the 87-year-old veteran peace activist Erhard Eppler, who was a cabinet minister under Willy Brandt. Writing in Der Spiegel, he pours scorn on the notion that Putin is the only one who has violated international law in Crimea: “What does international law say about the death drones that are also steered from German soil? Isn’t the sovereignty of the Federal Republic of Germany and thus international law damaged? Who would ever come up with the idea to ban America because of the Iraq War—which Gerhard Schroeder spared us Germans from—from the community of civilized peoples?” Eppler also voiced understanding for Putin. In his view, Putin had little choice but to act. In Kiev what was presented as a temporary government was, in fact, “a rigidly anti-Russian team that had to be taught that it couldn’t immediately abolish Russian as an official language and immediately join NATO. A Russian president who simply looked on would have been hunted down sooner or later by Russian voters.”

Of course an emollient view of Putin rooted in German historical guilt for World War II only goes so far to explain Berlin's stance. Money plays a big role. German companies, from Siemens on down, are loath to give up their lucrative contracts with Moscow. They may be only too happy to see American companies refusing, at the behest of Obama, boycotting Putin's economic summit in St. Petersburg.

Finally, it can't be all that surprising that Germany, decades after reunification, would begin to define its interests differently from Washington's. This redefinition, you could even say, was inevitable. The suprising thing may be that it took as long as it did to occur.

Still, if Germany is drifting away from America--and it's easy to exaggerate the extent of the drift because fears about Germany have been voiced ad nauseam since the 1950s about the true depth of its commitment to the western alliance--then that drift has been taking place for awhile. But there's no denying that it's been compounded by maladroit American diplomacy and foreign policy since the fall of the Berlin Wall. Indeed, Germany isn't the only ally that appears to be at odds with Washington. Israel, too, appears to be cozying up to the Putin regime for a host of reasons. Soon enough, Germany, Israel, and Russia might find out that they have more in common with each other than America. It all brings to mind Lord Palmerston's adage about having neither permanent allies nor enemies.