Japan: The Next Major Player in the Taiwan Strait? 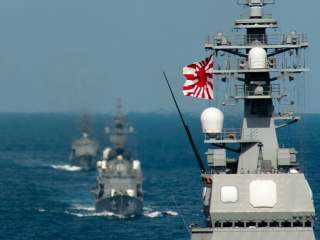 In his recent talk with U.S. Deputy Secretary of State Antony Blinken, China’s Director of the Taiwan Affairs Office Zhang Zhijun reiterated Beijing’s cross-Strait policy. Beijing will continue to uphold the 1992 Consensus, which accepts “one China” but allows strategic uncertainty surrounding its precise definition, resolutely opposes to any form of secessionist activities seeking Taiwan independence and firmly safeguards national sovereignty and territorial integrity. As Taiwan’s president-elect Tsai Ing-wen and her traditionally pro-independence Democratic Progressive Party (DPP) still decline to accept the “One-China” principle of the 1992 consensus, the future of cross-strait relations is fraught with uncertainty. While it is important for the DPP to find “a mutually acceptable mode of interaction between Taiwan and the mainland,”  changes of the strategic situation in the Asia-Pacific region and the close people-to-people relations between Taiwan and Japan have given Tsai Ing-wen a new opportunity to cooperate with Japan in the cross-Strait issues, which currently involve only Taiwan, China and the United States.

A Changing Strategic Environment in the Asia-Pacific

Since the Obama administration announced its “pivot”—later termed the “rebalance”—to the Asia-Pacific region in 2009, the United States has focused on strengthening and modernizing its alliance with Japan. The new Guidelines for U.S.-Japan Defense Cooperation (“the Guidelines”), which was announced in April 2015, has reinforced alliance cooperation without preset geographical limits and enabled “seamless and effective” alliance responses to security threats. Japan’s enactment of two new security bills later that year has also expanded the scope of its Self-Defense Forces (SDF)’s activities overseas and broadened the areas in which they can operate. This enhancement of Japan’s defense posture allows Japan to play a greater role in the regional security, which seems to create a strategic environment from which Taiwan could benefit in managing ties with Beijing.

That said, to what extent the United States and Japan will cooperate in the event of a Taiwan Strait contingency so far remains ambiguous. Although the Guidelines and the security bills signal an expansion of Japan’s military role abroad, they did not explicitly mention the areas of alliance cooperation have extended to the Taiwan Strait. How much Taiwan can actually benefit from these changes of strategic situations thus sees limitations. Instead of sitting and waiting for a more favorable international environment, the Taiwan government can take the initiatives to turn the tide in its favor.

The Taiwan government can capitalize on a growing cordiality between the Japanese and Taiwanese people to make Japan a bigger player in the cross-Strait issues. It is hoping that with a deep affinity with the Taiwanese people that is formed in the Japanese society, a pro-Taiwan momentum will emerge. Along with the help of Taiwan-friendly bipartisan caucus in the Diet, the strong force of public opinion can press the Japanese government to adopt a more active response to a Taiwan contingency.

Based on the reasoning, the new Taiwan government’s Japan policy can be two folds. First, the policy can encourage frequent people-to-people exchanges between Japan and Taiwan to increase positive views of Taiwan in the Japanese society. Currently, a regular people-to people exchange between the two sides is underway. On bilateral visits, the most recent data released by Japan Tourism Agency showed that Taiwan, following China and South Korea, is the third favorite destination among Japanese travelers. It is worth noting that while the number of the Japanese tourists to China and South Korea has been declining since 2010, the number of Japanese visitors to Taiwan each year has grown. Taiwan’s Tourism Bureau also reported that Japan was the most favored destination for Taiwanese travelers in 2015. Continuous people-to-people exchanges between Taiwan and Japan have benefited people’s positive impressions toward each other. According to a 2011 survey released by Taipei Economic & Cultural Representative Office in Japan, 67 percent of Japanese respondents expressed that they felt close to Taiwan, which was 10.8 percentage points higher than in 2009. The same survey also showed that 91.2 percent of the respondents reported that the Taiwan-Japan relations were on good terms. Increasing favorable views on Taiwan can help generate a strong force of public opinion in Japanese society, which can influence the Japanese government in crafting its Taiwan policy.

In fact, the exchanges between the caucuses and the new Taiwan government are in progress. In a meeting with Tsai Ing-wen on January 27, Keiji Furuya, chief executive of the Japan-ROC Diet Members’ Consultative Council (“Nikkakon”) said that the caucus will support Taiwan in its efforts to participate in the second round of the TPP negotiations. Even during the presidential campaign, Tsai Ing-wen visited Nikkakon in Japan to emphasize the importance of strengthening the Japan-Taiwan relations.

Instead of managing the relationship with Japan at only the official level, Taiwan has been maintaining a close non-governmental, working-level relations with Japan. Against the backdrop of a strengthened U.S.-Japan alliance and an expanded Japan’s defense scope, Taiwan can provide incentives to make Japan play a greater role in the cross-Strait issues. Taking advantage of a pro-Taiwan momentum in the Japanese society can be a way to effectively pressure the Japanese government to support Taiwan in its political appeals.

Emily S. Chen is a Silas Palmer Fellow with the Hoover Institution, a Young Leader with the Pacific Forum CSIS and a Non-Resident Fellow with the Center for the National Interest. She holds a Master’s degree in East Asian Studies and a focus on international relations at Stanford University. Emily tweets @emilyshchen.