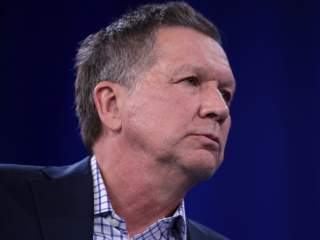 Now that Marco Rubio’s presidential campaign has stalled on the tracks like the D.C. Metro system, what are establishment Republicans to do? What options are available for the big GOP donors and political strategists who are desperately trying to save the party from nominating Donald Trump—a candidate who exhibits qualities that are the exact opposite of what the Republican Party believed was necessary to win a presidential election after a second humiliating loss to Barack Obama?

Keeping Trump short of the 1,237 delegates he needs to win the GOP nomination on the first ballot at the convention appears to be Plan A for the establishment. Swallowing their pride and getting behind Ted Cruz, the senator from Texas who is universally hated in the Washington, D.C. area, is also on the table.

But what about Ohio Gov. John Kasich? Despite his proclamations to the contrary, Kasich is as establishment as the GOP establishment is going to get for the remainder of the race. If Trump is the grassroots, angry populist and Cruz the uncompromising conservative, then Kasich is the guy who talks about healing America, welcoming moderate Democrats onboard the compassionate conservative platform, and rising above the divisiveness that has torn the Republican Party apart at the seams during this election cycle. Kasich, after all, loves giving hugs.

Kasich has survived so far by keeping his head down and winning his home state of Ohio. But now that he is one of only three candidates remaining in the race, the former congressman and current Governor of Ohio will face the kind of media scrutiny that he has managed to avoid since he announced his candidacy. It will show that he is an outright mediocrity.

Kasich served on the House Armed Services Committee for eighteen years, where his strong beliefs on fiscal responsibility and budget cutting earned him the moniker of the “cheap hawk.” He accomplished next to nothing, apart from limiting the procurement of B-2 bombers.

During his long tenure in Congress, Kasich casted a number of votes on war-and-peace issues, voting for the Gulf War in 1991 but opposing Ronald Reagan’s decision in 1983 to send U.S. Marines to Lebanon for a peacekeeping mission. He reminds voters during town hall meetings and debates that the United States should get out of the business of nation-building and should stay far away from manufacturing democracies around the world. But he also floated the preposterous idea that the way to stop ISIS in its tracks is for the next president to create a new government agency to “beam messages around the globe” about the American credo of liberty.

At times, it is difficult to pinpoint what kind of foreign policy doctrine a potential President John Kasich would follow. He’s asserted that Russian President Vladimir Putin has gotten away with far too much during the Obama administration, including his annexation of the Crimean Peninsula, his military and economic support to separatist forces in eastern Ukraine, and his decision to send fighter jets into Syria to strengthen the defenses of Bashar al-Assad’s regime. “[I]t’s time that we punched the Russians in the nose,” Kasich told radio host Hugh Hewitt during a December presidential debate. “They’ve gotten away with too much in this world, and we need to stand up against them . . . in Eastern Europe where they threaten some of our most precious allies.”

On other issues, like the nuclear agreement with Iran, Kasich has oscillated between common sense (“You're going to rip it up and then what?”), depressed resignation (“I'm sort of sick to my stomach about it because . . . Iran's going to get a ton of money”) to defiant opposition (“if I were president, I would call them and say, I’m sorry, but we’re suspending this agreement”). With respect to the Islamic State, Kasich has emphasized coalition building with Arab allies similar to George H.W. Bush’s alliance building during the Persian Gulf War—a safe position that is just muscular enough to pass muster with Republican voters, but benign enough that it wouldn’t raise the eyebrows of realists who call the party home.

The looming question is whether John Kasich is hawkish enough for the GOP foreign policy establishment, a club that has been heavily influenced by neoconservative thinking for the past fifteen years. But it’s not like the establishment has much of a choice; if Donald Trump is a candidate that top Republican foreign policy experts cannot support and Ted Cruz is the equivalent of a freight train traveling full-speed towards the edge of the cliff, then Kasich is the only alternative left. The only problem is that he’s a lousy one.