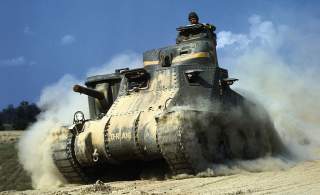 It was North Africa, in the winter of 1943, and American soldiers were feeling cocky as they prepared for their first ground battle against the Germans in World War II. So far, it hadn’t been a bad war for the U.S. Army. The GIs were well fed, well paid and well equipped, especially compared to their threadbare and envious British allies. Even better, their baptism by fire had been to splash ashore in Algeria and Morocco in November 1942, where the defenders had been unmotivated Vichy French soldiers who soon capitulated.

Maybe defeating Hitler wouldn’t be so hard, after all.

The GIs should have remembered what the British had learned the hard way: never underestimate the Germans. Soon Field Marshal Erwin Rommel, admiringly dubbed the “Desert Fox” by the British, would teach the rookie Americans a lesson on the art of war at a dusty defile called Kasserine Pass.

Perhaps the Americans could be forgiven for a little cockiness. Rommel’s legendary winning streak had come to an end at El Alamein in November 1942. Pursued by Field Marshal Bernard Montgomery’s British Eighth Army, Rommel had abandoned his Italian cannon fodder and retreated five hundred miles along the North African coast, from Egypt to Tunisia.

This time was different. While the Eighth Army cautiously pursued Rommel from the east, the British First Army and U.S. II Corps landed in Algeria and Morocco on the western end of the Mediterranean. Which meant Rommel was being squeezed from two sides, caught between Allied pincers and the deep blue sea.

But a trapped fox is no less dangerous. The wheels fell off the Allied advance during the “Race for Tunis,” where both sides dashed to seize that vital port that sustained Axis logistics. The Allies lost the contest, but they were handicapped by rain and mud, poor supplies, poor command and control, and German air superiority—the Luftwaffe operated from paved Tunisian airfields, while Allied planes sank into swampy dirt airstrips.

While another warlord might have tried to evacuate his troops to fight another day, Hitler was willing to sacrifice his to retain a bridgehead, in the belief (not wholly illogical) that it was better to have the Allies fight over African desert than storm mainland Europe. To augment the fifty thousand German and Italian troops of Rommel’s Panzerarmee Afrika, Hitler poured in 112,000 Germans, as well as more tanks (including a battalion of Tigers), planes and supplies. Soon the Fifth Panzer Army joined Rommel’s Panzerarmee Afrika. Just a year before, such largesse might have handed Germany the Middle East. Now Hitler was just buying time for a miracle.

Tunisia was shielded to the west by the Dorsal Atlas Mountains, which were crossed by just a few passes, including Kasserine. The Allies came close to breaking through, only to be stopped by panzers and Stuka dive-bombers. For Lt. Gen. Dwight Eisenhower, the Mediterranean supreme commander who just two years before had been a mere colonel in the Pentagon, this was also a baptism of sorts. Not only had he been thrust into command of half a million men, but he also had to keep the peace between his feuding collection of Americans, British and French generals. Eisenhower decided to halt and regroup, then resume the advance later.

The enemy chose not to wait. True to their tradition of choosing offense over defense, the Germans planned to strike first. Like the Allies, they were riven by dissension between Rommel and Gen. Hans-Jürgen von Arnim, the more cautious Fifth Panzer Army commander.  But eventually a plan was hatched that turned encirclement into advantage: the eastern and western Allied armies were separated by the Tunisian bridgehead, which gave the the Axis the opportunity to concentrate on one Allied wing, and then the other. While Montgomery’s Eighth Army was held at bay by the Mareth Line defenses, assault force centered around the Tenth and Twenty-First Panzer Divisions would hit the Americans at Kasserine and Sbiba passes.

Commanders usually try to establish their headquarters near a road, adjacent to existing communications facilities and close enough to the combat units for convenient visits. Fredendall’s was distant from the front and far up a canyon, a gulch that could be entered only by a barely passable road constructed by his corps engineers. Though towering mountains and wooded hillsides concealed his presence, he had underground shelters dug and blasted for himself and his staff. Two hundred engineers would work for more than three weeks on this project, then abandon it unfinished under the German threat at Kasserine.

Fredendall was a micromanager who placed his battalions rather than leaving the decision to his subordinates on the spot. Perhaps it made sense on a map to fortify the Tunisian djebels, or hills, into strongpoints. But the hilltops were too far apart to support each other, nor could they stop the enemy from infiltrating through the valleys below. It didn’t help that Fredendall was quarreling with Gen. Kenneth Anderson, commander of the British First Army.

Fredendall’s troops were also lacking. Not in courage, but in the knowledge that armies learn the hard way. The Thirty-Fourth Infantry Division, for example, was composed of National Guardsmen who lacked physical fitness and basic soldiering skills such as map reading. The Americans laid minefields in front of their positions, marked with flags so their own troops wouldn’t run into them; the Germans appreciated the thoughtfulness. Communications, and command and control, proved inadequate. As for the equipment, the M-4 Sherman was a decent tank in early 1943, while halftrack-mounted antitank guns were vulnerable. When Gen. Omar Bradley asked a GI if Germans machine gun bullets could penetrate the thinly armored M-3 halftrack troop carriers, the reply was, “No, sir, they only come through the wall and rattle around a bit.”

Kasserine was actually a series of lost battles. The first victims were the undergunned Free French, who were ejected from Faid Pass on January 30: a U.S. armored riposte was decimated by German antitank guns. Emboldened, Rommel urged a massive attack, which he commanded himself. Fortunately for the Allies, the Germans opted two separate attacks, one launched by von Arnim and the other by Rommel, who failed to support each other.

On February 14, von Arnim struck Sidi Bou Zid in Operation Frühlingswind (“Spring Wind”). The Thirty-Fourth Infantry Division had fortified three hills, too far apart to offer mutual support. The veteran German armor and mechanized infantry bypassed and surrounded the defenders and overran an artillery battalion. A counterattack by the First Armored ran into the panzers—including Tigers. The Americans lost more than one hundred tanks and 1,500 prisoners (one of whom was Patton’s son-in-law, Col. John Waters). Two days later, at Sbeitla, a German night attack by panzers and infantry routed the First Armored as fleeing vehicles jammed the roads (“we just lost our heads,” a soldier later admitted sheepishly, according to Blumenson).

Worse was to come. Fredendall, who had evacuated his command post to a yet “safer” location, ordered a withdrawal. U.S. troops concentrated around Kasserine Pass, only to be hit by Rommel’s German and Italian troops on February 19. Again, the Germans bypassed and surrounded American strongpoints. Some defenders fled, others fought, and all were engulfed by chaos.

Field Marshal Harold Alexander, an experienced and imperturbable British commander, was shocked when he visited the II Corps. “Confusion among the retreating units, uncertainty among commanders, and the lack of a coordinated plan of defense convinced him that drastic measures were necessary to restore stability,” Blumenson recounts. Alexander’s drastic measures were to order the retreat to halt and the defenders to fight, while British and American reinforcements arrived. As at the Battle of the Bulge, it wouldn’t be the last time that the British helped “tidy up” an American disaster.

Finally, the tide began to turn. U.S. and British artillery combined to unleash devastating barrages on the attackers. As Allied resistance stiffened, the German commanders quarreled over whether to press the offensive or quit while they were ahead. Even Rommel, convinced the Germans had missed an opportunity to score a decisive blow, realized the game was over. The Axis withdrew, and Rommel shifted his forces to make an unsuccessful attack on the Eighth Army.

Revenge for Kasserine came on May 13, 1943, with the surrender of Axis forces in Tunisia. Into the barbed-wire cages streamed 275,000 German and Italian prisoners, more than at Stalingrad. Von Arnim was among them, but not Rommel, who had flown back to Europe.