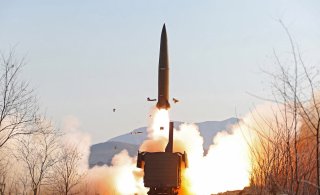 North Korea fired a ballistic missile on Thursday, the latest in a flurry of missile tests amid mounting tensions amid military tensions on the Korean Peninsula. South Korea’s Joint Chiefs of Staff (JCS) confirmed the launch of a short-range ballistic missile from the North’s coastal Wonsan area in the morning. The missile flew around 240 kilometers (149 miles) and reached an altitude of 47 kilometers (29 miles), the JCS said.

Thursday’s launch was accompanied by threats from top North Korean officials of fierce retaliation against “provocative” behavior by the United States and its allies. “The keener the U.S. is on the ‘bolstered offer of extended deterrence’ to its allies and the more they intensify provocative and bluffing military activities on the Korean Peninsula and in the region, the fiercer military counteraction will be,” North Korean minister of foreign affairs Choe Son-Hui said in a statement, according to The Korea Times. “It will pose a more serious, realistic and inevitable threat to the U.S. and its vassal forces.”

President Joe Biden warned Chinese leader Xi Jinping earlier this week that Washington will take unspecified “defensive” actions in response to future nuclear tests by North Korea, NBC reported. U.S. and allied officials previously said that the DPRK is preparing to conduct its seventh nuclear test, which would mark the first such exercise since 2017, though the timing remains unclear.

North Korea launched a record number of projectiles in 2022, testing eighty missiles including several reported hypersonic weapons. Pyongyang conducted a suspected intercontinental ballistic missile (ICBM) test on November 3. South Korea’s military said the ICBM launch, which triggered evacuation warnings in northern Japan, “is presumed to have ended in failure.” The White House condemned North Korea over its ICBM test. “This launch, in addition to the launch of multiple other ballistic missiles this week, is a flagrant violation of multiple UN Security Council resolutions and needlessly raises tensions and risks destabilizing the security situation in the region,” read a statement by National Security Council Spokesperson Adrienne Watson. “The United States will take all necessary measures to ensure the security of the American homeland and Republic of Korea and Japanese allies.”