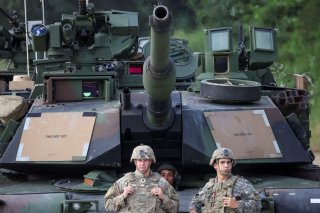 South Korea is a longstanding treaty ally of the United States; indeed, Washington regularly intones that the relationship is “ironclad.” Yet, Beijing believes that South Korea’s stake in China’s future economic prospects will see it fall out of the American orbit. At least some prominent South Koreans agree that such a drift is underway. For instance, according to the leader of the main opposition party, Lee Jae-myung, “we are maintaining strategic ambiguity … I think the situation is coming where we can make decisions independently, putting our national interests first.” But what they don’t understand is that when it comes to shaping geopolitical alignments, not all exports are equal.

First, some quick background. South Korea really likes positive trade balances. While there are many reasons for this, in large part it’s a legacy of the export-led growth model which accompanied its rise from a poor country to a member of the Organization for Economic Cooperation and Development in just a generation. This was good for South Korean living standards but also its prestige. South Koreans understand that exports are intimately tied to national status. Exporting takes on a further edge due to South Korea’s history with its former colonizer and high-tech export rival Japan.

Both China and Japan think about exports in a similar way to South Korea and understand how seriously Seoul takes them. China has repeatedly used South Korean exports to China as a carrot and a stick to prod Seoul away from Washington, most notably following the deployment of an American Terminal High Altitude Area Defense (THAAD) missile defense battery. Seoul responded with a concession, promising “three noes”: no additional THAAD batteries, no participation in a U.S. regional missile defense, and no trilateral military alliance with Washington and Tokyo. Japan also went after South Korean exports in order to check what it saw as the Moon Jae-in administration’s pro-Beijing and Pyongyang—and anti-Tokyo—tilt by restricting the supply of materials crucial to South Korea’s high-tech manufacturing. South Korean national feeling being what it is, this provoked a much stiffer response from Seoul.

America’s role in this geoeconomic drama is quite different. As the world’s largest economy and a net importer (unlike China), and the source of the most advanced technology, South Korea Inc. can’t function without the United States. Washington regularly sets off panics in Seoul, barely registering that its policies may have a negative impact on South Korean exports. Relying on China for finished batteries, semi-finished goods, and key input materials, the threat of the Inflation Reduction Act’s battery provisions to South Korean electric vehicle-related exports to the United States saw Seoul scrambling to find support in Europe and elsewhere to oppose the law, and hastily organizing a delegation to Washington to try and water it down. The “Chip 4” initiative presented a different challenge: how to participate in order to maximize access to American subsidies, markets, and technologies, while not incurring retaliation from China over participation in U.S.-led “containment.” Seoul’s solution was to sell Beijing on its participation, promising to work to limit the initiative’s effect on China’s technological upgrading—precisely what Washington is trying to target.

So we are in a strange situation where Beijing is able to leverage South Korea’s reliance on American technology and markets (as well as cost-effective Chinese labor) to pit Seoul against its ally. Given Beijing’s successes and South Korean compliance to date, it’s not surprising that a narrative of inevitable strategic convergence has developed on both sides of the Yellow Sea. But South Korea’s burgeoning arms exports are complicating this picture.

According to data from the Stockholm International Peace Research Institute (SIPRI), South Korea’s share of global arms exports grew 177 percent from 2017 to 2021, more than any other major supplier. In the past nine months, South Korea has signed big arms export deals with Australia, the United Arab Emirates, Egypt, and Poland. Aiming to continue the momentum set by his predecessor, President Yoon Suk-yeol has set his sights on making South Korea one of the world’s top four weapons suppliers. The boom has coined a new term: “K-Defense,” joining the ranks alongside attention-grabbing cultural exports K-pop, K-cinema, and K-drama.

Much of this success can be chalked up to the cost-effectiveness and timely delivery of South Korean weaponry, in line with the competitiveness of South Korea’s tradable goods sector more generally. And, like some other key high-tech exports, the South Korean arms industry benefits from access to American technology. Notably, the new KF-21 fighter jet relies on the United States for its all-crucial engines. So while some of South Korea’s attraction as an arms supplier combines a sheen of neutrality with access to U.S. technology, this sales pitch won’t mean much where U.S. strategic interests are at stake. Also, American allies won’t remain customers for long if Seoul is willing to cut off supplies at the behest of Beijing or Moscow. When push comes to shove, Seoul doesn’t have the option of being neutral if it wants to keep expanding its share of the arms market.

And South Korea will want to keep expanding its share, especially in this renewed era of great power competition. In this world, South Korea wants to be able to produce effective weapons systems, requiring access to U.S. technology and the economies of scale that exports bring. Growing insecurity in Europe and Asia means that the high-end arms market will continue to grow and it will be impossible for South Korea, which faces difficult economic circumstances and demographic decline, to wean itself off the industry. Step by step, its own defense needs and commercial pressures mean that it will choose, however reluctantly, to satisfy U.S. preferences and disappoint Beijing. Expecting the compliant trend to continue, a frustrated Beijing will retaliate against soft targets, such as in the tourism, entertainment, or education sectors. This will push forward Sino-Korean decoupling, leaving South Korea no choice but to double down on its alignment with the West. Arguably then, the significance of the burgeoning South Korean arms exports goes even beyond the cogent case Peter K. Lee and Tom Corben recently laid out. They are absolutely correct that Seoul, with its “apparent ‘strategic ambiguity’ when it comes to the U.S.” is nevertheless “generating strategic effects by arming states facing Chinese and Russian coercion.” But it is likely locking itself into making increasing contributions to collective regional balancing in the future as well.

There is a certain irony in this. South Korea pursues the development of its arms industry to be what former President Moon called a “dignified sovereign state in the midst of the great powers.” But that path is tying South Korea more closely to the United States. Beijing also inadvertently brought this on itself. In part, South Korea is aggressively pursuing new markets and opportunities because Beijing has repeatedly reminded South Koreans of the dangers and humiliations of economic dependence on China. And as for Washington, it probably sees no need to nudge an “ironclad” ally into ever tighter strategic alignment. But it is doing so all the same.