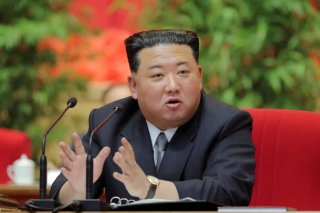 In a highly unusual move, North Korean leader Kim Jong-un convened a conference of officials from the country’s ruling Korean Workers’ Party on Thursday, intended to strengthen its “monolithic” control over North Korean society, according to the state-run Korean Central News Agency (KCNA).

The KCNA report claimed that the conference, held at the April 25 House of Culture in Pyongyang, took place from July 2 to July 6 and had involved the “organizational and ideological consolidation of the Party ranks in every way.”

The event in Pyongyang promoted the role of Party Life Guidance (PLG) committees, a group of local organizations across North Korea that ensure loyalty to the ruling party at the grassroots level. The U.S.-based Committee for Human Rights in North Korea claimed in 2019 that the activities of the PLG committees were “arguably the most critical function” of the party as a whole.

Kim reportedly praised the committees’ work during the conference, describing the organization as a whole as a “blood vessel and nerve gland” linking the North Korean people with the party’s upper echelons. He also claimed that the PLG committees were primarily responsible for ensuring that policies enacted by the North Korean politburo were implemented at local levels.

Although North Korea was already one of the world’s most centralized and totalitarian states before the onset of the COVID-19 pandemic, outside observers have speculated that the central government’s control over North Korean society has been strengthened as Pyongyang has placed increasing restrictions on travel and economic activity in an effort to keep the country free of coronavirus. Despite these efforts, North Korean officials announced that they had detected the country’s first known COVID-19 cases in May and began vaccinations in June. They have since claimed that the country’s caseload—officially set at five million cases and seventy-three deaths—has been brought under control. However, these claims have been met with skepticism from the international community due to North Korea’s rudimentary healthcare system, poor ability to collect statistical data, lack of capacity to conduct COVID-19 tests, and extremely low vaccination rate. North Korea has also faced a series of major natural disasters recently, including spring and summer floods from 2020 until 2022.