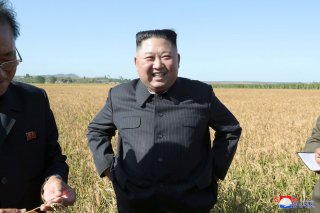 Kim Jong-un has proved, once again, to be a mysterious man with a calculating mind. No one knows for certain what happened to him during his 20-day absence in April. His broad smiles when he reemerged on May 1 seem to suggest that he revels in the drama and global attention that his disappearance generated.

What will happen to U.S.-North Korea relations between now and the end of the year?

When asked about Kim’s health and whereabouts, President Trump simply said “I wish him well.” After the two Koreas exchanged fire at the DMZ recently, Secretary of State Mike Pompeo stated that the shots fired by North Korea were likely “accidental,” apparently downplaying the incident and avoiding offending Kim. Clearly the Trump administration wants to maintain good relations with North Korea.

Trump’s poor performance in containing the coronavirus and America’s economic woes may well cost him his job. China-bashing alone will not be sufficient for his uphill battle for reelection, and he could use a little help from Kim, who is capable of creating a distraction to help Trump as the presidential campaign heats up.

For example, Kim could trigger a crisis by testing a nuclear weapon or attacking a South Korean or Japanese target to create an opportunity for Trump. Then Trump, following his playbook, will first condemn North Korea for its provocation, and then stage a hurriedly-arranged summit (online this time), or a phone conversation, with Kim to “reach a deal.” Such a display of his “leadership” in a foreign policy crisis will help deflect attention away from his domestic problems and boost his chance for reelection.

Kim may actually be tempted to trigger such a crisis before the November election, since it will send a warning to Trump or a different president about what lies ahead. If Trump loses, the new president will face a tough Kim and may have no better choice than accommodate him before the two sides sit down and talk.

Kim, on the other hand, may need Trump’s help in handling the looming health crisis and consolidating his image at home as a world leader. It is unclear what is happening inside North Korea as far as COVID-19 is concerned. Judging from the fact that many North Koreans are wearing masks and Pyongyang has requested medical help from Russia and China, it can be assumed that North Korea is suffering from the pandemic. This provides an opportunity for the Trump administration. Without lifting the UN sanctions, Trump could resume humanitarian aid such as sending American Red Cross workers, medical equipment and food to North Korea.

No one should underestimate Kim’s diplomatic skills. He recently congratulated Xi Jinping on China’s apparent success in fighting against COVID-19. By doing so, Kim killed two birds with one stone. As China faces mounting external criticisms about its bungled handling of the coronavirus at the outset, with calls for an independent investigation and lawsuits for reparations, Kim’s friendly gesture and solidarity with China are timely and appreciated by Xi. As a result, Xi has replied to Kim by vowing deepened bilateral cooperation. For Kim, Beijing’s backing is sine qua non for dealing with uncertainties associated with U.S. elections.