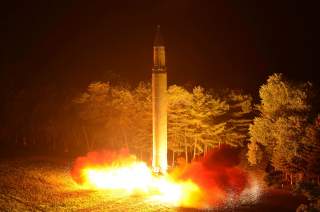 Testifying to the House Armed Services Subcommittee on Strategic Forces this week, NORAD Commander Terrence O’Shaughnessy had some troubling news for lawmakers on the dais: North Korean leader Kim Jong-un is making consistent improvements on his ballistic missile program.

In a statement to the panel, O’Shaughnessy wrote that Pyongyang’s missile capabilities are approaching a pivotal inflection point for the United States and indeed may have already entered into a new phase. "Kim Jong-un has demonstrated the capability to threaten the U.S. homeland with nuclear-armed ICBMs,” the commander told lawmakers. "In 2017, North Korea successfully tested an apparent thermonuclear weapon as well as two ICBM designs capable of ranging most or all of North America -- feats only the five permanent members of the U.N. Security Council had previously achieved.” As the man responsible for the defense of the North American continent, O’Shaughnessy is paid to worry about the worst-case scenario: a North Korean nuclear-tipped ICBM roaring towards the U.S. mainland, piercing Washington's unreliable anti-missile defense system, and landing with deadly impact on a major population center.

The general’s concerns are not totally unfounded. It is an indisputable fact that North Korea is improving its missile capacity. According to the latest report from the U.N. Panel of Experts, Pyongyang conducted 13 missile tests last year, including what the North Koreans claimed was a successful testing of a submarine-launched ballistic missile, the Pukgukson-3. Frustrated with the progress of nuclear diplomacy, Kim Jong-un all but confirmed that 2020 will be the year when North Korea formally breaks its nearly three-year-long ICBM test moratorium (Kim already told the world at last December’s Workers Party plenum session that the moratorium is for all intents and purposes null and void). If the first three months of 2020 are an indication of what is to come, we can expect more activity on the missile front, including additional drills of large-caliber multiple launch rocket systems like the KN-25; more short and medium-range ballistic missile launches, some of which may land in Japan’s Exclusive Economic Zone; and perhaps even an ICBM on a lofty trajectory. Military officers like Gen. O’Shaughnessy can’t take any of those options off the table.

The bottom-line, however, is largely the same: if the United States can avoid unnecessarily poking Kim Jong-un in the eye with overly provocative military exercises (overflying the Korean Peninsula with nuclear-capable long-range bombers is one of the most provocative moves Washington can take), then Kim will have no reason or incentive to utilize any of these weapons systems in a real-world scenario. As Robert Manning, a veteran staffer on the National Intelligence Council, observed last month, deterrence on the Korean Peninsula is still stable and will remain so as long as the United States keeps a cool head, doesn't overreact to inevitable North Korean military tests, and ensures trilateral cooperation between Washington, Seoul, and Tokyo in the military and intelligence domain is as seamless as it can be.

Of course, not of this is as easy as it sounds. The Japanese and South Koreans are not exactly on the best-speaking terms at the moment, with the relationship on weak knees under the weight of historical differences and trade spats. The tone in Washington on anything related to North Korea is usually over-the-top and inconsistent with the actual threat the country poses to U.S. national security. U.S. politicians have an inclination to panic whenever North Korea conducts a missile launch of any range, assuming the worst is just around the corner. The U.S. media keeps the story alive with sensationalist headlines. U.S. national security officials also often make the situation worse by inflating their own rhetoric, an ingrained habit that increases Pyongyang’s guard and feeds right into its original justification of why all of these military tests are necessary.

Unfortunately, the foreign policy establishment in Washington has demonstrated no maturity on this score. As the North Koreans continue testing, you can bet your bottom dollar that U.S. officials in the Beltway will do what they always do: talk tough and lose sight of the forest for the trees.

Image by Reuters: Intercontinental ballistic missile (ICBM) Hwasong-14 is pictured during its second test-fire in this undated picture provided by KCNA in Pyongyang on July 29, 2017.