2021 Won't Be Any Better for North Korea 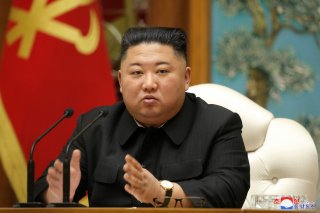 If you aren’t a billionaire on par with Jeff Bezos or Bill Gates, the year 2020 was probably one of the worst on record. But for North Korean leader Kim Jong-un, 2020 was a living hell. True, he remains untouchable politically, didn’t contract the coronavirus himself (as far as we know), and exported enough coal despite UN sanctions to survive the poorest economic year since the 1990s. But as Pyongyang prepares for its first Workers’ Party Congress in five years, Kim’s prospects for 2021 don’t look any rosier than they did at the beginning of 2020.

Being squeezed financially and finding a way to do more with less is not a new set of circumstances for the Kim regime. What is new, however, is biting your teeth while seeing trade with China plummet by approximately 75 percent and North Korea's gross domestic product decline by 8.5 percent. While international sanctions have no doubt contributed to these numbers, the real culprit is the coronavirus pandemic, which forced Kim to shut the borders and adopt extremely strict import measures (those caught flouting the rules are summarily executed). Pyongyang is entering 2021 in such dire financial straits that Kim himself openly wept and apologized to the North Korean people for failing them. A South Korean government source I spoke with told me Kim Jong-un is now going through his most difficult period as leader since he inherited the dynasty from his father, Kim Jong-il, nearly a decade ago.

Some experts see North Korea’s flailing economy and come to three conclusions: 1) the incoming Biden administration has more leverage over Pyongyang than it thinks, 2) North Korea is in such desperate shape that it may just fire off another intercontinental ballistic missile in the hope Washington comes back to the table, and 3) the Kim regime will focus its 2021 agenda first and foremost on alleviating its own domestic problems.

The third conclusion is a fair point and likely correct. The upcoming party congress scheduled for next week is likely to conclude with a new economic program, including but not certainly not limited to the possibility of a slow, phased, strictly-monitored reopening of its border with China and a greater tolerance for informal private trade on the black market—even if that means loosening the regime’s grip on the market for the sake economic expediency.

However, the first and second conclusions on that list are hardly full-proof. Logic would suggest that the weaker North Korea’s economy is, the more likely the country’s political leadership would be willing to compromise with the United States on its nuclear weapons program. That logic only holds, however, if the United States is willing to drop the same maximalist demands that the North has consistently, forcefully, and unambiguously rejected. The North Koreans would love to see the sanctions lifted, their trade unhindered, and the U.S.-North Korea diplomatic relationship normalized. But as much as the North Koreans dream of such a situation, there is no evidence Pyongyang is interested in eliminating its nuclear deterrent to get to there. Indeed, if economic pressure was the magical ingredient, North Korea would have denuclearized a long time ago. For the North, the ultimate security guarantee is still vastly more important than economic prosperity—and no sanction or U.S. military exercise is going to change this fundamental calculus.

In other words, the Biden administration will be engaging in self-delusion if it comes into office believing a poor economy will drive the North into doing what it has refused to do for years: hand over the keys to its nuclear kingdom. This doesn’t mean Kim would be opposed to other diplomatic arrangements with Washington, such as an interim freeze-for-freeze agreement or a deal fashioned in the traditional mould of an arms control accord. But it does mean that quick, complete, and verified denuclearization is as unlikely in 2021 as it was in 2020.

What about an ICBM test early in the year? Those of us in the West have a tendency to base our North Korea assumptions on worst-case scenarios. One of the most frightening and flash scenario for North Korea observers is a nuclear-tipped ICBM splashing somewhere in the Pacific Ocean. There is an ingrained habit in the Washington foreign policy community to believe that just because Pyongyang engaged in missile tests in the first year of the Obama and Trump administrations, it will do something similar or identical in the opening months of the Biden administration.

Fortunately, worse-case scenarios don’t often come to pass. While the conventional wisdom states that an ICBM test would increase North Korea’s bargaining position vis-a-vis the United States, there are diplomatic, military, and strategic reasons for the Kim regime to restrain its itchy trigger-finger—at least until it knows what exactly the Biden administration plans to do on the North Korea file. Kim isn’t stupid; he understands there are costs associated with another ICBM test. One of them is a deterioration in Pyongyang's otherwise decent relationships with China and Russia, who have served as North Korea’s chief advocates on the Security Council and have prevented additional North Korea-related sanctions resolutions from being passed. Why Kim would want to jeopardize this dynamic, or even risk jeopardizing it, for the sake of sending a message of defiance and resolve to Washington is difficult to explain.

Nor would another ICBM test make much sense from a diplomatic standpoint. At a time when the Kim regime is putting North Korean diplomats in foreign missions on a short-leash and signaling to the European Parliament that Pyongyang is still interested in a positive relationship with the West, a long-range missile test would send precisely the opposite message. It would also complicate South Korean President Moon Jae-in’s plans, making it more politically difficult in Seoul for any inter-Korean initiative to get off the ground.

All ears are open to what Kim Jong-un will do during the party congress next week. But rather than sitting on the edges of our seats in anticipation, perhaps it’s best to sit back, wait, and actually listen to what he has to say.