2025: The First Anniversary of Peace on the Korean Peninsula 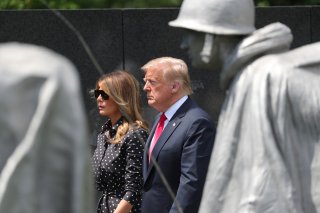 Editor’s Note: As the world commemorates the 70th anniversary of the start of the Korean War, the Center for the National Interest’s Korean Studies team decided to ask dozens of the world’s top experts a simple question: Do you believe that the Korean War will finally come to an end before its next major anniversary in 2025? The below piece is an answer to that question. Please click here to see even more perspectives on this important topic.

If I look back from this year, the seventieth anniversary of the outbreak of the Korean War, I see an interminable conflict, but if I look ahead to its next major anniversary, five years from now, I see the best prospects for its closure so far this century. Indeed, I see prospects of any grade for the first time this century.

If in 1984, five years before the end of that four-decade-long Cold War between the United States of America and the Union of Soviet Socialist Republics, a person had been asked whether it would all end within five years, then they would have been considered a fool to say that they knew it would. If a person had misinterpreted the “it would all end” in that question to be referring to a potential nuclear annihilation of human civilization or end to the conflict by that means, then they might even have been considered less of a fool than if they had truly been forecasting with such certainty that it would end anything like how it did. And yet in 1989, the Eastern Bloc began to crumble, the Berlin Wall was torn down, and the leaders of both states recognized at their Malta Summit that the Cold War had come to a close.

If a person had been more nuanced in their answer, reckoning that certain factors led them to believe there was a significant probability—higher than the baseline of preceding decades if not necessarily over 50 percent—that the Cold War would end within that period, then that person still may have been a minority opinion but not an outright foolish one nor mere expression of hope. I believe that within these next five years leading up to the Korean War’s seventy-fifth anniversary in 2025, there is such a significant probability. And though I can’t be certain the war will formally come to a close within that period, I certainly believe it can. So what are the “certain factors” underlying my belief?

Though it does serve to guard the regime’s existence by providing a deterrent to external attempts at regime change by force, it also paradoxically incentives external agents to instigate regime change. And while a sufficient conventional defense capability to this end perhaps wouldn’t be sustainable over the coming decades absent possession of a nuclear deterrent, perhaps it would even if sanctions were sustained and even in a regional environment of increased hostilities between the United States and the People’s Republic of China. Perhaps more difficult to replace than the nuclear weapons capability’s role in guarding regime existence, however, is its role in guarding regime independence. If France at the beginning of the Cold War, sandwiched between the United States and the Soviet Union, despite its alignment with the United States nonetheless felt it critical to its independence that it develop and maintain its own nuclear weapons capability, then take a moment to consider how North Korea, sandwiched between the People’s Republic of China and United States, despite its alignment with the PRC might regard its nuclear weapons capability as critical to preserving the independence of its regime.

I would not expect there to be progress on an end to the Korean War until there was some notion of what alternative solutions to these dual needs North Korea may be willing to accept, as well as how the United States and South Korea may be willing to institutionalize them. That being said, it’s my sincere hope that in 2025 we won’t just be commemorating the seventy-fifth anniversary of the war’s commencement but celebrating the anniversary of its conclusion as well.