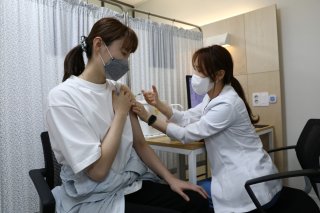 Cases and hospitalizations related to the highly transmissible Omicron variant indeed have waned in the United States, but it appears that South Korea is in the middle of a devastating wave and it’s likely to get worse.

According to the Korea Disease Control and Prevention Agency (KDCA), per Yonhap News, the East Asian nation of 52 million reported 90,443 new Covid-19 infections on Tuesday. That number is sharply up from the day before when new daily cases hit 57,164. Just a couple of weeks earlier, daily caseloads were below 30,000.

Meanwhile, per Stars and Stripes, the U.S. Centers for Disease Control and Prevention (CDC) on Tuesday advised Americans against traveling to South Korea. The CDC decided to change its travel advisory to the nation from level three to level four—its highest category—due to the “very high” number of Covid-19 cases reported there.

“With all its might, the government will do its best for the settlement of new preventive measures against COVID-19 and its medical treatment system and to try to ensure the people go forward to their normal life again,” Park Hyang, head of the General Epidemic Prevention Office, said Tuesday in a public media briefing.

South Korea’s medical care system “is in a stable condition,” she added.

Prime Minister Kim Boo-kyum has warned that the number of infections has not reached a peak yet, and that the government will consider the situations of pandemic-hit small businesses and the general population when it decides Friday on whether to change current social distancing rules.

Currently, private gatherings are restricted to six people, and a 9:00 p.m. curfew is imposed on all restaurants and cafes.

“The government will decide after considering both financial damages that people have suffered from the strict social distancing rules over the past two months, as well as the spread of Omicron variant, which we don’t know when its peak will arrive,” Kim said, per The Korea Herald.

It has been reported that some health authorities there are now warning that the daily caseloads could eclipse 170,000 by the end of February. An even more pessimistic view is being held by the National Institute of Mathematical Sciences, which is projecting that maximum daily caseloads could potentially hit 360,000 by early next month.

“It has been almost a month since Omicron became the dominant variant in Korea,” Choi Jae-wook of Korea University Hospital’s preventive medicine division told The Korea Times.