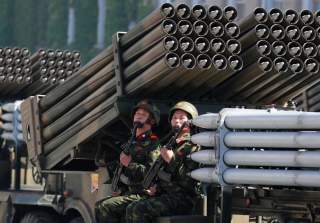 Eighteen months after North Korea shut down its Punggye-ri nuclear test facility, there has been no major observable activity at the site.

But the regime of North Korean leader Kim Jong Un clearly is maintaining Punggye-ri and could reactivate the site with little notice.

North Korea likewise hasn’t tested a longer-range ballistic missile -- the kind that could carry a nuke over great distance -- since late 2017. That testing-halt, like the ongoing shuttering of Punggye-ri, could be temporary.

“Commercial satellite imagery from early July indicates that, while the Punggye-ri nuclear test site has not been abandoned, there is no activity around the test tunnels (portals) or command center,” Frank Pabian and Jack Liu reported for 38 North, a think tank that’s part of the Stimson Center in Washington, D.C.

“Personnel movement around the main administrative support area has been evident including indications that vegetables are being grown in the greenhouse area,” Pabian and Liu continued. “While no activity has been observed around the command center, the area continues to be well-maintained since the test site was shut down in May 2018.”

While North Korea has not signalled it will give up its roughly 50 nuclear warheads nor dismantle the medium- and long-range missiles that can carry the warheads, Kim's regime has made some conciliatory gestures.

In April 2018 it announced it would halt the testing of longer-range missiles and also suspend warhead trials at Punggye-ri. North Korea has conducted all six of its nuclear tests at the site in the country’s northeast. It tested its first atomic weapon in 2006. Its last and most powerful trial occurred in September 2017.

The 2018 testing-halt offered some hope that Kim and U.S. president Donald Trump could come to a meaningful agreement that at least reduces the nuclear threat from North Korea.

But despite meeting three times in 2018 and 2019, Trump and Kim have not agreed to a plan that would permanently halt or reverse North Korea’s nuclearization.

David Wright, the co-director of the Union of Concerned Scientists' Global Security Program in Massachusetts, in a February 2019 explainer neatly summarized the suspension of missile tests and its implications.

"This represents a big change," Wright wrote. "In the five years 2013 to 2017, North Korea launched more than 80 flight tests of 10 different missiles, or an average of 16 flight tests per year. In 2017 alone, it launched 20 tests of seven types of missiles, including the successful launch of two different long-range missiles."

Countries typically test a new missile dozens of times before deploying it. Even though North Korea had one successful launch of its Hwasong-15 ICBM in late 2017, it has little idea whether a second test would be successful. These are very complicated mechanical systems and you need repeated testing to discover the possible failure modes and understand their probabilities.

For a missile to be militarily useful, you want to know how reliable it is. And you want to understand how likely it is to blow up on the launch pad before you decide to put a nuclear warhead on it.

In addition to this, North Korea hasn’t demonstrated a working reentry heat shield on a long-range trajectory. As long as it’s willing to accept low accuracy—which it would be if it plans to target large cities—developing a working heat shield doesn’t require advanced technology.

North Korea should be able to solve this problem with time, but it is unlikely to consider these missiles militarily useful without actually demonstrating the technology on a flight test. A ban on testing keeps it from doing that.

While some press reports have said that following its one successful flight test of its Hwasong-15 ICBM, North Korea is working to mass produce it, I don’t believe they would do that. Preventing further flight tests would prevent this missile from becoming militarily useful. It would also limit operational training of military troops with its missiles.

So preserving North Korea’s ban on flight tests is an important security measure.

Wright advised Trump and Kim during their summit in Hanoi in February 2019 to formalize the test-flight ban as well as to extend the ban to cover shorter-range missiles.

That didn’t happen. The Hanoi summit ended early without anyone agreeing to anything.

But Punggye-ri remains closed, albeit ready to reopen on short notice. The ongoing suspension of active warhead and missile testing offers some hope for eventual progress.

“North Korea has not yet taken irreversible steps toward ending its missile program,” Wright wrote. “But it has taken meaningful steps that would have been unthinkable as recently as 2017, and that suggests an openness to further steps that would be more meaningful. That would significantly advance security interests of the United States and its allies in the region.”

Achieving these steps is likely to require a phased step-by-step process. There are a set of potential steps the United States could take as part of the negotiations. These include discussions of a peace treaty or new security arrangement in the region, scaling back military exercises that the North sees as threatening, and selective easing of sanctions.

A verified ban on flight testing, of course, is just a step. The ultimate goal should be to stop further missile development and production at all levels, and to eliminate existing missiles—and that is what the United States should be working for.

But that will require North Korea to feel secure enough to agree to these steps, which would include intrusive verification measures. That is not going to happen overnight and will require reciprocal steps by the United States.