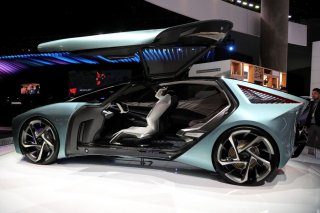 Despite its many struggles during the pandemic, the North Korean regime attempted to buy $1 million worth of Lexus SUVs in 2020, NK News reported, citing a forthcoming report from the United Nations Panel of Experts (PoE).

According to the report, “a Nanjing-based company was involved in efforts to supply Lexus LX570 SUVs to North Korea.” Any shipment of such cars would likely violate U.N. Security Council sanctions that disallow the importing of luxury items to North Korea.

Kim Jong-un is known to personally favor Lexus SUVs. Last August, he was photographed visiting a village that had suffered massive flooding and arrived in a Lexus SUV, the UPI reported at the time.

When that happened, Automotive Map reported that Kim had “done something few owners of a Lexus LX 570 do - gotten it dirty off-roading.” It also noted that the model was likely from the last few years, and described the LX 570 as “rather filthy.”

Back in 2019, the New York Times, with an assistant from the Center for Advanced Defense Studies, explored how Kim gets his hands on luxury cars, amid the sanctions and other challenges.

“When looking at the dictator’s high-profile public appearances, it would be difficult not to notice that they all share something in common: Mercedes. Mercedes. Rolls-Royce and more Mercedes,” the Times said.

Among the cars Kim owns is a “bulletproof” Mercedes, a specific model which is “primarily marketed to world leaders.” The current SUV that transports the U.S. president, known as “The Beast,” is a Cadillac.

The cars, per the Times, follow a “circuitous network of ports,” which include the use of a “ghost ship” owned by a Russian businessman.

“ The first part of the journey looks like a regular shipment. Nothing out of the ordinary. The cars are on two of the containers on this ship. From here, they’re transported on a major international shipping line,” the Times said. "After a forty-one-day journey, the cars arrive in China. We track them to the port of Dalian. From here, the cars are shipped to Japan, and from there they are sent in yet another ship to another port in Busan, South Korea. And here, the Russian-owned ship at the center of our investigation enters the picture. It picks up the containers and when it leaves the port, mysteriously vanishes, turning off its required transponder. Eighteen days later, the ship reappears, but now the cars are gone. And instead, it’s carrying coal.”

The owner of the “ghost ship,” a Russian who has been accused of evading sanctions in the past, admitted to the newspaper that he had purchased the cars.