America and China Have Hampered Peace Progress on the Korean Peninsula 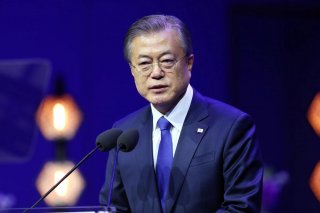 In the last few years, the twists and turns of international politics in Northeast Asia have opened up unexpected opportunities for diplomacy, fueling hopes that a settlement to formally end the Korean War might finally be within reach. But in the present moment, a peace agreement seems painfully unrealistic, at least in the short-term. Recently, tensions on the Korean Peninsula were put on vivid display by the demolition of the inter-Korean liaison office in Kaesong. Furthermore, Washington and Pyongyang have remained at a deadlock since talks broke down at the Hanoi summit in March 2019.

The discordant approaches taken by South Korea, the United States, and China have hampered progress toward peace on the peninsula. Seoul’s pro-peace diplomacy has been undercut by Washington’s “maximum pressure” campaign, which in turn has been undercut by Beijing’s loosening of sanctions enforcement. Unfortunately, synchronizing regional policies toward North Korea will be even more difficult as the strategic rivalry between the United States and China continues to intensify.

As we commemorate the seventieth anniversary of the Korean War, we are reminded of the outsized impact that U.S.-China relations have had on the Korean Peninsula. In October of 1950, Mao Zedong made the fateful decision to assist North Korea in its fight against U.S.-led UN forces. His decision to do so was borne not merely out of a desire to promote revolution in Asia, but also a belief that an American victory on the Korean Peninsula would constitute an intolerable threat to China’s national security. The United States, for its part, vastly underestimated China’s resolve and dismissed Beijing’s warnings against crossing the 38th parallel, only to be ambushed in a surprise attack by Chinese forces. The Chinese and North Korean delegations entered into negotiations with the United States/UN in July 1951 but continued a policy of “talking while fighting” for two years. The armistice, eventually signed in July 1953, left the two Koreas divided and came after the war had already claimed more than a million lives.

Seventy years later, U.S.-China relations once again risk detrimentally impacting the future of the Korean Peninsula. The intensifying geopolitical competition between the United States and China is likely to drive both to advance their own interests through conflicting policies. The impulse to approach the Korean Peninsula through the lens of their strategic rivalry will also mean that progress toward a peace settlement and denuclearization risk becoming contingent on other sensitive regional issues. Such issues may include the East and South China Sea disputes, as well as the U.S. troop presence, military assistance to allies, and its THAAD missile defense system in South Korea. Moreover, as the Korean Peninsula becomes further enmeshed in U.S.-China competition, both sides will be tempted to blame the other when setbacks occur, which will only harden perceptions and erode strategic trust. A Korean War peace settlement will require substantial multilateral policy coordination, which has regrettably become even more difficult with the deterioration of U.S.-China relations.

Kacie Miura is an incoming Assistant Professor of Political Science and International Relations at the University of San Diego. She received her PhD in Political Science from the Massachusetts Institute of Technology, where she was a member of the Security Studies Program. She is a research fellow at the Harvard Kennedy School’s Belfer Center for Science and International Affairs. She previously served as a Peace Corps volunteer in Fuling, China.