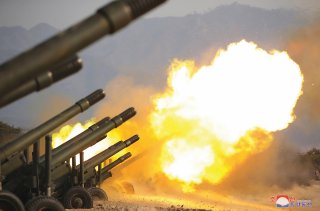 The COVID-19 pandemic demonstrates the need to develop comprehensive strategies to effectively confront some of our country’s most vexing problems. Discordant approaches by policymakers and officials, mixed messaging, inadequate planning and preparedness, and a lack of a clearly articulated strategy can prevent us from responding effectively to both domestic and international challenges.

There are parallels to one persistent challenge in American foreign policy throughout the past seventy years: the challenge posed by North Korea. Despite three historic meetings between the leaders of the United States and North Korea since 2018, little concrete progress has been made to end decades of hostility between both countries.

As politicians and diplomats continue efforts to engage North Korea, a long-term, comprehensive strategy related to North Korean policy needs to be developed. With tensions ebbing from the point when President Donald Trump threatened “fire and fury” against North Korea, to decreased concern among the American public about the threat posed by North Korea, we run the risk of complacency and a return to the status quo with our North Korea policy. And in the midst of the pandemic, North Korea is actively continuing its testing of ballistic missiles.

Instead, U.S. policymakers should understand that it may still take many years for the challenges posed by North Korea to be resolved. Yet, if we patiently harness the power of our creativity and innovative thinking, provide opportunities for our next generation, and support principled engagement, we have an opportunity to create a more peaceful and stable environment in northeast Asia in the years to come.

To start, the United States should invest in innovative ideas and the next generation of experts on Korea, northeast Asia, and national security. This can be done through expanded critical-need language instruction as well as study abroad, exchange, and fellowship programs focused on North Korea. And after investing in the next generation, the government should make efforts where possible to recruit and retain these individuals in the national security workforce.

It will also be necessary to tap into the expertise of key stakeholders and lean on the relatively few Americans who have direct experience engaging with North Koreans. Many of these Americans who do not currently serve in government are affiliated with think tanks, academia, and organizations such as the National Committee on North Korea. These organizations and individuals should be encouraged to pursue Track II diplomacy whenever prudent and possible. This is especially important in moments of diplomatic standstill, like today.

While North Korea has often been likened to a “black hole” for the American intelligence community, in recent years, a remarkable amount of information about the country has proliferated in open sources. Websites now publicly exist that utilize data, technology, imagery, and analysis to give anyone with an internet connection access to large quantities of information about North Korea. The American government could bolster the efforts of researchers and Korea experts by declassifying materials related to North Korea whenever possible, as long as the declassification would not harm national security, and also make more information available to researchers and the public from the Open Source Enterprise.

It is critical to encourage dialogue, facilitate people-to-people exchanges, and develop relationships that will hopefully build trust and defuse some of the decades-long tensions between North Korea and the United States. However, this is currently very challenging given the restrictions imposed by the U.S. Department of State on U.S. passport holders on travel to North Korea without a special validation in addition to the travel ban on North Korean passport holders visiting the United States.

This strategy will need to be aligned with the U.S. government approach. Leaders in the private sector, think tanks, and academia should be empowered to have their voices heard and be a vital part of this strategy. Those who are not experts on Korea or northeast Asia should be encouraged to share their thoughts in order to bring fresh thinking and new ideas to this complex and multidimensional problem.

Finally, part of America’s strategy must incorporate reinvesting in our values and our alliances. The leadership in Pyongyang is all too aware of Muammar Gaddafi’s fate after he was convinced to abandon his weapons of mass destruction program to normalize relations with the international community. After seeing this, coupled with the U.S. withdrawal from the high profile JCPOA and Paris Agreement and open discord in recent years with our allies and trading partners, what incentive does Pyongyang have to trust Washington’s word? Restoring trust in America’s word on the international stage must be a priority to eventually build a sustainable peace with North Korea. This will take time and effort but is vital to our national security.

One should not be naïve about the actions, intentions, or record of the North Korean leadership. But one should also not be naïve that the current impasse with North Korea is likely to continue unless creative, long-term thinking and different approaches to US-North Korea relations are brought to the table. North Korea is a country of over 25 million people, not just one leader. Adopting pragmatic policies that better the lives of ordinary North Koreans, avoid devastating military conflicts, and create a more stable, prosperous, and peaceful northeast Asia will begin by investing in a new strategy and a new generation’s ideas about the Korean peninsula.

Matt Abbott is director of Government and Diplomatic Programs at the Chicago Council on Global Affairs. The views expressed in this article are his own and do not represent any institutional positions.