America Is Safe From North Korea, Even if Kim Jong-un Dies 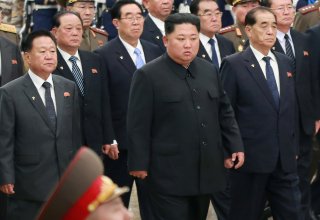 International media was buzzing last week and into this weekend when a news outlet run by North Korean defectors reported that “multiple sources” in North Korea claimed that dictator Kim Jong-un had undergone a heart procedure of unknown severity. CNN later added that a source reported Kim was in “grave danger.” To date, North Korean media has remained silent on the matter. Whether Kim is ill or merely out of public sight, however, it is instructive to consider what might happen if Kim did suddenly die.

Fundamentally, it's important to recognize that regardless of who is in charge in Pyongyang, the balance of power remains stable—the U.S. has overwhelming conventional and nuclear dominance over North Korea. Even its neighbors are vastly more powerful. North Korea will continue to be deterred, regardless of who leads the country.

When Kim Il-sung died in 1994 and when Kim Jong-il died in 2011, both of them had groomed their would-be successors. Presently, no known successor exists. Nevertheless, there is a tight, powerful group of senior leaders that are absolutely, totally committed to the Kim family regime and will continue to exert control.

The senior leaders, bureaucracy and administrative system remain in place and will continue functioning without a change in the near term. Potential long-term successors include Kim's sister, Kim Yo-jong, and his brother, Kim Jong-chul. There is little likelihood, despite what some suggest, that a violent power struggle would immediately result.

Shortly after Kim Jong-un ascended to power in 2011, he purged every leader he feared might threaten or challenge his authority. He ordered many of the top leaders assassinated—including his own uncle and older brother. The key leaders Kim installed or left in place have exhibited absolute loyalty to Kim's family, and thus, there are presently no publicly known threats to Kim or his regime.

The people have been subjected to a cult of personality that began shortly after the end of World War II and continues today. That would make it unlikely, though not impossible, for a general or another strongman to seize power due to this lack of legitimacy; anyone lacking the “royal blood” of the Kim family would find it hard to gain the support of the population.

The most important thing to remember is that the U.S. is strong, and North Korea is weak and deterred. The U.S. military has an overwhelming conventional and nuclear advantage regardless of who is in control. Whether there is chaos or a smooth power transition, our security is not at risk and our deterrence will keep us safe indefinitely.

Any transition of power would be exclusively determined from within the ruling elites in Pyongyang. South Korea would likely elevate its alert status to watch closely for any possible events in any scenario. But like all nations, South Korea would work to quickly establish diplomatic relations with the new North Korean leader and continue to build on progress toward peaceful relations and keep the Korean Peninsula stable.

The U.S. should recognize its dominant position, keep focused on our interests, and signal it has no intention of using unprovoked military force or seizing an opening for regime change. The U.S. should reiterate its willingness to normalize relations, negotiate for freezes and rollbacks to North Korea's weapons programs, and work toward peace and eventual denuclearization.