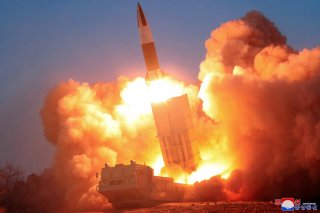 North Korea launched a pair of ballistic missiles last week, just a few days after it launched a couple of cruise missiles. The launch drew condemnation from multiple governments, including those of the United States and South Korea. Later in the week, North Korea claimed the launches successfully reached their targets and even touted that it had launched a new type of missile. It was the first ballistic missile launch by North Korea in about a year.

On Tuesday, 38 North published an analysis of what took place with North Korea’s launch, why they did it, and what comes next.

The analysis stated that the missiles launched “appears to be a variant of the previous KN-23 short-range ballistic missile (SRBM),” and that the launch likely took place more for political than for military reasons, “probably to signal the new Biden administration that it should not be taken for granted and will continue to develop its missile capabilities, as well as in response to the U.S.-ROK joint exercises currently underway.”

The site also called North Korea’s claim that the missile had a 2,500-kilogram warhead that it carried to a 600-kilometer range “likely a deliberate overstatement.” Japan and South Korea had said that the missiles reached a distance of 420 to 430 kilometers.

Even if that were true, a 2,500-kilogram warhead, per the report, would likely not be required for the missile to carry a nuclear warhead. And while North Korea claims the missile is new, the regime “already unveiled in 2019 three new solid-propellant SRBMs that have all of the key attributes of the new missile, and that collectively add incrementally to the longstanding North Korean SRBM threat.”

“As is usually the case with North Korean missile activities, there is much we cannot confirm and do not know. In particular, we do not know that the missiles depicted in the photos were the missiles actually launched, nor do we know the payload weight, the degree of success of the missile flights, or if they in fact hit their intended targets,” the report noted, adding that the missiles may be the same ones that were unveiled at the Kim Jong-un regime’s military parade on Jan. 14.

“The most interesting aspect of the North’s claims is the new missile’s purported 2,500-kilogram payload, larger than the original KN-23,” the analysis states. “A larger payload is consistent with the more conical front section of the missile seen in the photos released with the launches and with the longer missile seen in the January parade.”

38 North also concluded that the launches were likely a response to the joint exercises carried out by the United States and South Korea earlier this month, during the visit to the region by U.S. officials, and that part of the idea of the launches was to highlight “achievements of North Korean science and technology.”

“That these launches involved SRBMs, not longer-range systems, suggests the DPRK did not want to provoke a crisis with the new administration at the outset, but it is also consistent with the idea that the North is testing how the new administration will respond, and is reserving the right to conduct (if not gearing up for) further tests at increased ranges based on its assessment of the new US leadership,” the report said.