Are The Rockets Fired by Hamas into Israel Coming from North Korea? 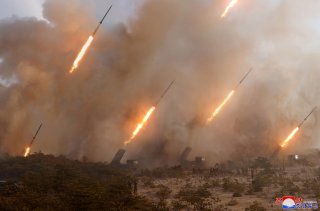 In recent weeks, Hamas has fired thousands of rockets into Israel, inflicting casualties and damaging property – though Israel’s Iron Dome system is assessed to have shot down the vast majority of rockets. Most pundits and scholars have blamed Iran for the large supply of rockets that Hamas has fired into Israel. But evidence shows that there is likely more to the story.

According to reporting in The Telegraph during July of 2014, North Korea had entered into a deal with Hamas to sell the terrorist organization both rockets and communications gear. The deal is said to have been worth several hundred thousand dollars so it is likely that if it went through it involved the sale of thousands of North Korean rockets to Hamas. The deal was reportedly brokered through a Lebanese front company with ties to Hamas, located in Beirut. In addition, by the time the article was published, a down payment had already been made, so it is likely that the shipment of rockets and communications gear occurred sometime in late 2014.

The rockets that North Korea probably sold to Hamas in 2014 were likely 122mm and/or 107mm systems (or variants thereof) – which Pyongyang produces indigenously. These rockets are very cheap to produce and comparatively cheap to sell (plus the North Koreans keep these systems in stocks), and thus the assessment that if the deal was completed, the number of rockets likely numbered in the thousands.

In addition, the Hamas need for thousands of more rockets could not have been more glaring in the late summer of 2014, as they had fired at least 4,500 rockets during the conflict that had occurred with Israel.  So it was the perfect time for North Korea to step in and provide the support (for a price of course) that Hamas needed in order to effectively conduct their next conflict against Israel.

But there is more support to combat operations that North Korea provided to Hamas – some of it very relevant to the current conflict. Israeli military officials who were involved in Gaza operations in 2014 have reportedly assessed that North Korea provided assistance to Hamas in building the extensive tunnel network that supports their combat operations. These tunnels are so extensive that Israelis have nicknamed them “The Metro.”

This should come as no surprise since the North Koreans also provided Hezbollah assistance in building its tunnels and underground network that was utilized during the 2006 war with Israel. It was the extensive Hamas underground tunnel network that Israel targeted recently as one of the key nodes bound for destruction.

Finally, imagery and other reports indicate that North Korea has sold their indigenously produced version of the Russian 9K111 Fagot, which the North Koreans call the “Bulsae-2,” to Hamas (an anti-tank weapon). The North Koreans likely used Iran as a conduit for the sale, and the picture showed a member of the Izz ad-Din al-Qassam Brigades (loyal to Hamas) with the North Korean version of the weapon. Israeli tanks have (at least thus far) not crossed into Gaza. But if they do, this is certainly a weapon that will be a threat.

It should now be obvious that North Korean arms sales in the Middle East, to Iran and Syria, and to proxies such as Hezbollah, Hamas, and the Houthis, are a threat to American national interests.  In the past two years this is now the second time we have seen North Korean weapons systems that are a threat either directly to U.S. forces, or to important American allies.  As I stated in a previous National Interest article, on January 7, 2020, Iran launched ballistic missiles at American bases located in Iraq.