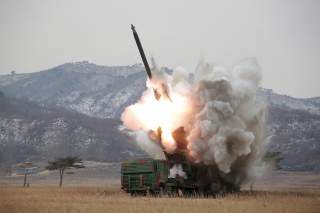 Efforts by the United States and North Korea to revive denuclearization talks appear to be going nowhere fast.

After three high-profile but largely substance-free meetings between U.S. President Donald Trump and North Korean dictator Kim Jong Un, negotiators from both countries are struggling to define the terms of continued talks regarding Pyongyang’s nuclear-weapons program.

Since testing its first nuclear device in 2006, North Korea steadily has built up an arsenal of potentially dozens of nuclear warheads plus rockets to deliver them. Pyongyang in 2017 successfully tested a missile with intercontinental range, lending urgency to U.S. efforts to impose limits on North Korea’s nukes.

The latest hiccup came on Oct. 4 and 5, 2019, when negotiators met for the first time since March 2019. The meeting in Stockholm quickly fell apart as both sides refused to budge from their respective stances on the economic sanctions hamstringing North Korea’s economy.

As a result, “the prospects for further negotiations remain unclear,” explained Julia Masterson and Kelsey Davenport from the Washington, D.C.-based Arms Control Association. ”Pyongyang continues to reiterate that the Trump administration must change its position for the process to continue.”

After the abrupt end to the Hanoi summit in February [2019], North Korea blamed Washington’s approach to negotiations and refusal to consider sanctions relief early in the process for the failure, whereas the Trump administration said North Korea’s own proposal at Hanoi was imbalanced.

North Korean Leader Kim Jong Un said in April 2019 that the United States must change its position and agree to an approach that is beneficial to both sides before the end of the year or the “prospects for solving a problem will be bleak and very dangerous.”

Kim and U.S. president Donald Trump agreed to resume working-level negotiations after meeting at the demilitarized zone between North Korea and South Korea in June 2019, but the two leaders did not announce agreement on an approach for negotiating specific steps toward the goals agreed to in Singapore [in June 2018].

Trump said in September [2019] he was open to a “new method” for talks and U.S. Special Representative for North Korea Stephen Biegun stated Sept. 6, [2019] that there are “immediate actions” that both sides can take to “elevate relations from a place of hostility and distrust toward an agreed end state that fulfills the vision of our two leaders – provided that there is a clear commitment to fulfill all the areas of agreement made by our two leaders in Singapore.”

Kim Myong Gil said that a new method appears to be the “best option” and that “both [North Korea] and the U.S. solve feasible matters first, one by one in stages, while building confidence in each other,” likely referring to North Korea’s preference for an incremental approach that exchanges steps on denuclearization for actions by the United States to lift sanctions and address Pyongyang’s security concerns.

The weapon appeared to be a prototype for a submarine-launched ballistic missile. Paired with a functional ballistic-missile submarine, an SLBM would allow North Korea to launch nukes from the sea.

If North Korea adds sea-launched missiles to its current arsenal of land-based rockets, U.S. and allied forces likely would have a harder time preemptively destroying all of Pyongyang’s atomic weapons in the early hours of a war.

Pyongyang seems to realize it possesses an advantage. With a growing nuclear arsenal, it can escalate its demands and its rhetoric. Kim Myong Gill on Oct. 7, 2019 warned there could be a “terrible incident” if the United States fails to prepare for continued talks.