Armor Allies: Could South Korea and Poland Build a New Tank Together? 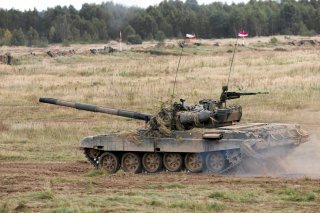 It wasn’t until the 1990s after the end of the Cold War that Poland and South Korea established formal relations, but since then the two nations have forged a close bond. South Korea has loaned Poland hundreds of millions of dollars in economic aid, while Poland remains a large consumer of Korean networking and mobile communications technology.

The close ties have given South Korea’s Hyndai Rotem a slight advantage in a potential partnership with Poland to develop the “Wilk” (Wolf), as part of the new generation main battle tank (MBT) program, which began earlier this year.

This is a notable turn of events, as last year Poland’s Ministry of Defense announced it would put its efforts towards the European Main Battle Tank project. The initiative was spearheaded by Germany and France, but Warsaw’s talks with Berlin and Paris have reportedly stalled. Now it seems that Poland is unlikely to cooperate on the joint tank program with its NATO allies and instead was looking for alternative partners in developing a next-generation MBT.

The Polish military currently operates some 247 Leopard 2 A4 and A5 tanks, which it acquired from Germany. However, the former Warsaw Pact nation still operates five hundred Soviet-designed T-72 and PT-91 tanks.

Poland is following a regional trend to modernize its tank force, and Hyundai Rotem now seems comfortable in the driver’s seat to develop a new MBT and take it to the finish line. The company even showcased a model of its modified K2PL variant of its K2 Black Panther MBT last week during the MSPO 2020 defense industry show in Poland.

“We’re open to cooperating with Polish companies, such as [the leading state-run group] PGZ. The tank would be produced in Poland, and we would provide Polish plants with our technology,” Lee Han-Soo, a senior manager at Hyundai Rotem’s global defense sales and marketing team, told Defense News at the MSPO defense industry show. “Production of this tank began a few years ago, and our technology is cutting-edge in comparison with our rivals’ products.”

Earlier this year a Hyundai Rotem official told The Korean Times that the project would be divided into two stages to produce a total of eight hundred tanks.

More Than a K2

The new tank for Poland could feature multiple enhancements over the original K2 tank, and this could include additional armor plates in the front and the sides, as well as slat armor at the rear of the vehicle. This attempt to "up armor" the tank could certainly increase its survivability against a range of threats including anti-tank guided missiles (ATGMs) and rocket-propelled grenades (RPGs). The K2PL MBT will also be fitted with automatic threat detection and tracking systems as well as anti-helicopter weapons, and it will be equipped with soft- and hard-kill active vehicle protection systems.

The mockup also shows an enlarged turret, while the driver station has been moved to the middle of the hull front to provide better visibility while making it easier for the driver to enter/exit the tank. In addition, it could ensure safer storage of the ammunition.

The tank will be powered by a 1,500 horsepower diesel engine coupled with an automatic transmission with five forward and three reverse gears. The suspension of the K2PL will feature seven road wheels instead of the six on the original K2, and the top speed is seventy kilometers per hour with a maximum range of 450 kilometers.

This could be Hyundai Rotem’s first export of a battle tank if it wins the order. The expected cost of the tank program is $8.85 billion reported Defence-Blog.

This could help further heighten the friendship of the two nations, each of which now faces a larger and potentially vastly more powerful adversary close to the border.