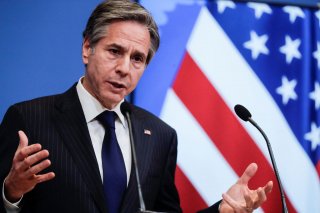 The Biden administration is slowly rolling out its foreign policy. The very public food fight with Chinese diplomats in Anchorage, almost certainly staged with domestic audiences in mind, demonstrates that relations between the world’s two most important nations will not be smooth.

However, that didn’t stop Secretary of State Antony Blinken from joining his predecessors in asking Beijing to solve the “North Korea problem.” While visiting Seoul he commented: “Virtually all of North Korea’s economic relationships, its trade . . . go through China so it has tremendous influence, and I think it has a shared interest in making sure that we do something about North Korea’s nuclear program and about the increasingly dangerous ballistic missile program.”

This is a bit like Charlie Brown asking Lucy, for the 937th time, to set up the football for him to kick the winning extra point, earnestly noting their shared interest in winning the game. He then puts the other 936 times when she yanked the football away at the last minute out of his mind as he runs toward the ball and . . . well, you know what happens, again.

There is nothing wrong with diplomats believing in miracles so long as they do not base policy on the expectation that unpleasant reality will be magically transformed. Unfortunately, Blinken, an experienced diplomat who should know better, appears to have fallen into that trap.

Blinken’s wish will go a glimmering for three reasons. The first is the failure of the People’s Republic of China to share Washington’s opinion of North Korea. Blinken observed: “Beijing has an interest, a clear self-interest in helping to pursue the denuclearization of DPRK.” He added: “Because it is a source of instability, it’s a source of danger and obviously a threat to us and our partners, but China has a real interest in helping to deal with this.”

Pyongyang and Beijing have always had a difficult relationship. After the North’s Kim Il-sung invaded the South, Mao had to intervene to prevent the United States and its allies from overrunning the DPRK and planting a hostile military presence on China’s border. Kim never publicly acknowledged the PRC’s costly rescue operation, during which Mao’s son was killed; Kim later purged Beijing’s friends from Pyongyang’s leadership.

After decades of difficult relations tensions were still evident when China approved UN sanctions on the North and Xi Jinping refused to meet with Kim Jong-un while routinely greeting South Korea’s president Park Geun-hye, even inviting her to a position of honor to watch the PRC’s parade on the 70th anniversary of the end of World War II. Only the impending Kim summit with Donald Trump and the consequent threat of the U.S. and DPRK reaching a modus vivendi caused Xi to reach out to his North Korean counterpart three years ago.

As Blinken recognized, the Chinese leadership long has desired stability on its border. Its preference would be a docile, non-nuclear puppet regime in Pyongyang, yielding a useful but not dangerous buffer state ready to carefully and responsibly discomfit the United States and its allies. However, Beijing long ago learned that it must deal with the North Korea that it has, not the one it wishes it had.

That means there is tension between achieving a stable and a non-nuclear North Korea. The pressure that Washington insists be placed on the North to achieve denuclearization would increase the risk of a North Korean explosion or implosion, unleashing violence and/or chaos on the PRC’s border. Imagine the Biden administration’s reaction if Beijing asked the United States to adopt policies likely to wreck Mexico—which possessed nuclear, biological, and chemical weapons. Would Americans welcome the possibility of political chaos, civil war, mass refugee flows, and perhaps more?

The second challenge is the PRC’s limited influence. If Beijing’s pleas for sweet reasonableness would likely be effective, Pyongyang would never have developed nuclear weapons and certainly would not be building ICBMs. China has ineffectively counseled caution for years. That is why the PRC joined America in approving UN sanctions. Also, that is one reason the former’s relations with the North were so rocky.

North Korea is not just being obstinate. It realizes that it cannot rely on the PRC for protection—the denizens of Zhongnanhai will take care of themselves before they worry about Kim & Co. Indeed, Korea spent centuries as a “shrimp among whales” attempting to balance China, Russia, and Japan. Now the United States has entered the mix as the most powerful but also most distant power. Nuclear weapons offer Pyongyang protection from Beijing as well as Washington. Almost certainly Kim hoped to use new ties with America to cement his autonomy from China; that didn’t work out as planned, but the PRC still does not want to drive Kim back toward the United States.

Finally, the Xi government desires to preserve the DPRK as essentially its only military ally—other partners, most importantly Cambodia and Pakistan, don’t brandish arms at America. This objective has become more important with Washington united on a more confrontational policy toward China, Beijing has no incentive to make the Biden administration’s life any easier. U.S. policy, whatever the rhetoric emanating from Washington, DC intends to contain the PRC. Further undermining North Korea economically could collapse the regime, risking reunification, which would place an American ally hosting U.S. troops on China’s border. From Beijing’s standpoint that would be a bad policy in the best of times. And these times are a lot worse.

Requesting Chinese assistance regarding the North when Washington is stepping up support for Taiwan’s autonomy if not formal independence is an act of almost spiteful chutzpah. American sympathy for Taipei is well-founded, but the Chinese belief that the island state was wrongly torn from the motherland and should be restored runs far broader than to just a few belligerent CCP leaders. Otherwise, freedom-minded students and anti-communist Chinese expatriates share these sentiments. Indeed, abandoning Beijing’s claim would be politically dangerous for Xi. The United States very publicly wants it all: predominance in Asian waters along China’s border, independence for Taiwan, and submission of North Korea, including possible reunification of the peninsula, all on America’s terms.

Facing what has been called the impossible state, Blinken understandably would like China to act as deus ex machina, addressing the geopolitical challenge. But this is a forlorn hope since the PRC is not on America’s side. Indeed, after Blinken’s Anchorage meeting Beijing announced that it and Pyongyang agreed “to uphold the political settlement of the Korean Peninsula issue and preserve peace and stability on the peninsula, so as to make new contributions to regional peace, stability, development and prosperity.” Even if mostly boilerplate, this sentiment certainly means that Beijing will not deliver the DPRK to Washington.

With the arrival of the Biden administration calm has descended on Washington. But that doesn’t mean America’s relationships with other nations will be equally tranquil. Especially in Northeast Asia. Dealing with China will be difficult enough. And contra Antony Blinken’s hopes, Beijing won’t be delivering a more docile North Korea any time soon.