The Ball is in Kim Jong-un’s Court 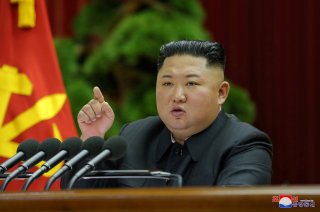 A stymied diplomatic process, as well as overriding domestic political considerations on both sides, will probably keep dynamics between North Korea and the United States relatively unchanged for the rest of 2020. While provocations and escalation are always a possibility on the Korean peninsula, the likelihood that both leaders see U.S.-DPRK dynamics as a key feature of their domestic political calculations only adds uncertainty to a historically tumultuous relationship.

After a year of remarkably aggressive rhetoric and almost two years of diplomacy with sky-high expectations for dramatic diplomatic success, declaring “there is no longer a Nuclear Threat [sic] from North Korea,” President Trump has only achieved a freeze in North Korean nuclear and long-range ballistic missile tests. Tangible progress toward North Korea’s denuclearization remains remote, and North Korea has been able to continue to build ballistic missiles and nuclear weapons while demonstrating increasingly sophisticated short-range strike capabilities.

These failures seem to have driven President Trump to adopt a third approach beginning in late 2019: declare victory and try to move on. He has adopted an “all is well” rhetorical posture, repeatedly dismissing North Korea’s short-range missiles tests and praising his “good relationship” with Kim while also establishing a rather permissive approach to North Korea’s human rights violations. President Trump seems to have shifted his priorities away from DPRK-focused diplomacy even before the COVID-19 crisis took hold, reportedly telling his advisors that he does not want another summit with Kim before the presidential election.

The result has been to signal that President Trump can tacitly accept a nuclear North Korea and even tolerate the likely ongoing development of ICBMs and nuclear weapons, so long as he can continue to point to North Korea as a foreign policy achievement. Yet by declaring success without achieving success potentially leaves President Trump vulnerable – likely driving him to prefer that the Korean peninsula remain quiet for the rest of 2020.

Yet we cannot be certain that these strategic considerations will outweigh Kim’s domestic political calculations. If Kim perceives his domestic position to be vulnerable, he may conclude that major provocations could buttress his power at home by demonstrating strength and resolve while potentially coercing some sanctions relief out of China or the broader international community. As North Korea may be in the midst of a major outbreak of COVID-19 and suffering a significant human and economic toll as a result, the potential for Kim to see himself in an uncertain political position may be higher than normal.

But as with any effort involving an attempt to understand Kim Jong Un’s or President Trump’s thinking or to predict their behavior, these analyses are provided with deep humility.

Abraham M. Denmark is Director of the Asia Program at the Woodrow Wilson International Center for Scholars, and a Senior Fellow at the Center’s Kissinger Institute on China and the United States. He is also an Adjunct Associate Professor at the Edmund A. Walsh School of Foreign Service at Georgetown University.  Denmark previously served as Deputy Assistant Secretary of Defense for East Asia and worked as Senior Vice President for Political and Security Affairs at The National Bureau of Asian Research, a Fellow at the Center for a New American Security, and held several positions in the U.S. Intelligence Community.

The views expressed are those of the author alone and do not represent the views of the Wilson Center the U.S. Government, or any of its agencies or departments.