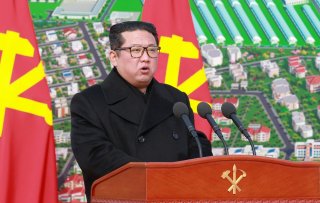 Kim’s call to action came at the three-day “Enlarged Meeting of the Eighth Central Military Commission,” which ended on Thursday. Although a similar meeting takes place each year and rarely results in significant policy changes for Pyongyang, the current iteration faced renewed interest worldwide due mainly to speculation that Kim intends to test a nuclear weapon in the coming weeks. U.S. and South Korean officials suggested earlier in the week that such a test could take place at “any time,” according to Reuters.

North Korea’s official Korean Central News Agency (KCNA) claimed that the officials present had “examined and approved an important issue of providing a military guarantee for further strengthening the country’s war deterrent”—either referring to a military buildup or a nuclear weapon. Although the KCNA report made no direct mention of North Korea’s nuclear program, it noted that Ri Pyong-chol, the director of the country’s ballistic missile program, had been elected as vice-chairman of the Party Central Military Commission, which guides its defense policy.

During the meeting, Kim “stressed the need for the entire army to … consolidate [North Korea’s] powerful self-defense capabilities for overwhelming any hostile forces,” according to the KCNA report. The news agency also announced that North Korean officials had examined the country’s overarching war plan and discussed revisions, a rare admission from the country’s normally-secretive defense sector.

Although militarism is a crucial aspect of juche, North Korea’s state ideology prioritizing economic and military self-sufficiency, the country has grown steadily more bellicose over the past eighteen months. Pyongyang has tested a variety of new missiles, including intercontinental ballistic missiles (ICBMs), short-range nuclear-capable missiles, and a new hypersonic missile. In April, Kim publicly called on the Korean People’s Army to “bolster up their strength in every way to annihilate the enemy.”

The North Korean government’s expansion on tests could be related to the election of Yoon Suk-yeol, a South Korean hardliner who has pledged to take a hard line against Pyongyang, to the South Korean presidency. In marked contrast to his liberal predecessor in office, Moon Jae-in, Yoon has publicly criticized negotiations with the North as a wasted effort and has vowed that South Korea would respond in kind to North Korean provocations, including through reciprocal missile tests.