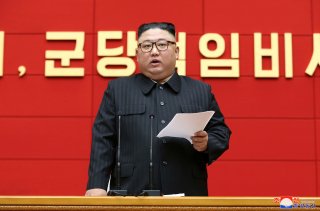 The U.S. Secretary of State Tony Blinken and Secretary of Defense Lloyd Austin are currently traveling in Asia on the first cabinet-level diplomatic tour of the Biden administration. While the secretaries are not going to North Korea or engaging directly with that country, the North Korea issue appears to be at the forefront of what’s being discussed in Blinken and Austin’s visits to South Korea, Japan and elsewhere.

Meeting the press during the trip, Blinken indicated that he’s planning a traditional “carrot and stick” approach when it comes to the North Korea nuclearization issue, one that will include both “pressure measures” and "diplomatic paths.”

“We’re looking at whether various additional pressure measures could be effective, whether there are diplomatic paths that make sense, all of that is under review,”  Blinken said in Tokyo, during an appearance with Secretary Austin and their Japanese counterparts, Toshimitsu Motegi and Nobuo Kishi.

“We’re looking at whether various additional pressure measures could be effective, whether there are diplomatic paths that make sense, all of that is under review,” Blinken added. “Going forward we have a shared determination to deal with the challenge posed by North Korea, particularly when it comes to its nuclear missile programs, as well of course as its abuse of human rights.”

What could pressure mean, in this context? It could entail additional sanctions, or possibly other measures. Blinken had testified during his confirmation hearing that he planned to look at additional pressure options when it comes to dealing with North Korea. The question will be how much pressure is applied—and how the North Koreans perceive it.

The administration is known to be undergoing a policy review in regard to North Korea, which is expected to wrap up in the coming weeks.

The potential approaches the Biden administration could take when it comes to North Korea.

One clue about how North Korea is approaching the matter is in a statement issued Tuesday by Kim Yo-jong, the sister of North Korean leader Kim Jong-un.

“We take this opportunity to warn the new U.S. administration trying hard to give off powder smell in our land,” Kim Yo-jong said. “If it wants to sleep in peace for coming four years, it had better refrain from causing a stink at its first step.”

But the ultimate U.S. policy objective for North Korea remains “the same as it ever was: final, fully-verified denuclearization,” according to Daniel DePetris.