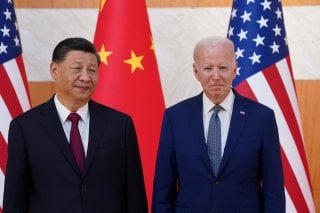 Fears over North Korea’s plans for a nuclear test have been increasing in recent months. There was even a belief that they planned to carry one out prior to last week’s midterm elections in the United States. Though that did not happen, some fear remains.

This week, during his trip to Asia, President Joe Biden addressed the issue. Per Yonhap News Agency, Biden says the subject came up during his meeting with Chinese president Xi Jinping, which was the first face-to-face meeting between the two leaders since Biden took office.

"I made it clear to President Xi Jinping that I thought they had an obligation to attempt to make it clear to North Korea that they should not engage in long-range nuclear tests," Biden said in a press conference that took place in Bali, Indonesia.

"And I made it clear as well that if they did, they meaning North Korea, that we would have to take certain actions that would be more defensive on our behalf," the president added. Biden had also said that the United States might up its military presence in the region if North Korea were to carry out a nuclear test.

"But it wouldn't be because of China [but] because of what was going on in North Korea," the president added. “The biggest concern I have is a misunderstanding about intentions or actions on each of our parts… I am confident China is not looking for North Korea to engage in further escalatory [actions], I mean because I made it clear and I made it clear from the very beginning and last year as well that we will do what it needs to defend our capacity, to defend ourselves and our allies, South Korea, as well as Japan," Biden said.

In a separate meeting on the visit with Prime Minister Fumio Kishida of Japan, the White House issued a “readout” that also mentioned the North Korea situation.

“In the meeting, President Biden reinforced the United States’ ironclad commitment to the defense of Japan following recent destabilizing ballistic missile tests by the Democratic People’s Republic of Korea (DPRK), including the long-range ballistic missile launch over Japan on October 3,” the White House said.

“The two leaders condemned these provocative acts and as well as the DPRK’s continued development of its unlawful weapons of mass destruction and ballistic missile programs. They reiterated their resolve to maintain peace and stability across the Taiwan Strait and to continue to impose costs on Russia for its unprovoked war on Ukraine,” the White House added.

Biden also met with the new president of South Korea on the trip, and the leaders of the three countries vowed a “unified response” to the threat from North Korea.