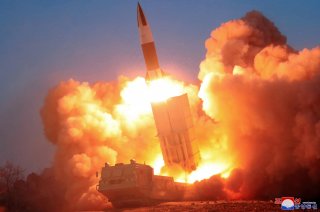 These three factors could overshadow the North Korean nuclear problem.

Coronavirus or not, a US president seeking a second term would normally be inclined to avoid risky foreign policy moves in an election year; Trump may prefer the status quo unless he decides he needs a foreign policy victory and believes the Korean Peninsula would help chances for reelection. North Korea said on March 22 that Trump wrote a “personal letter” to Kim offering to help fight the coronavirus. By continuing leader-level engagement, the letter may have been intended to prevent a North Korean provocation that would require a US response before November.

But eight months until the US presidential elections is not enough time to negotiate, sign and begin implementing a serious deal with North Korea. While policy options under the current political circumstances are very limited, inaction is not an attractive option either. The absence of a negotiated agreement allows for continued nuclear weapons development, particularly the production of fissile materials. A negotiated agreement would also be an opportunity for Pyongyang to receive some of its demands such as some sanctions relief or for the two sides to embark on a path toward normal relations and eventually establish a peace regime on the Korean Peninsula with South Korea and China.

As Trump and Kim are both unconventional leaders, there may be reasons for them to come together again, as risky as it might be without proper preparation. Perhaps each leader might be compelled if a reasonable interim agreement to begin implementing the 2018 Singapore Joint Statement delivers political points for Trump’s reelection campaign and some economic benefits for Kim.

The 2019 Hanoi summit essentially failed with a US rejection of North Korea’s demand for the lifting of post-2016 UN Security Council sanctions in exchange for its Yongbyon nuclear complex (and Kim’s apparent unwillingness to commit to putting all of his weapons of mass destruction on the table). Negotiations remain stuck, apparently over this point. A reasonable and proportionate bargain on this particular tradeoff—to serve as a first step in the longer process to denuclearization—could entail, for example, dismantling all of Yongbyon plus one uranium enrichment facility outside the complex in exchange for time-bound exemptions on some post-2016 UN sanctions (that could be renewed or extended based on fulfillment by Pyongyang of its commitments), an inter-Korean rail/road project, and humanitarian projects. An interim agreement along these or similar lines could be more comprehensive by addressing various configurations of tradeoffs of bargaining chips, including a complete ban on all missile and nuclear tests, the exchange of liaison offices, and a political war-ending declaration that does not alter the terms of the armistice and US troop presence.

As it continues to call on Pyongyang to resume negotiations, Washington could consider gathering support for an interim agreement from Seoul, Tokyo, Beijing, and Moscow. If successful, perhaps North Korea will feel pressured to return to dialogue or risk being blamed for breaking the diplomatic process. If a deal cannot be reached before November, the elements of such an interim agreement could be the starting point of discussions with the US administration after the elections.

Duyeon Kim is Senior Advisor for Northeast Asia and Nuclear Policy at the International Crisis Group. She is also an Adjunct Senior Fellow at the Center for a New American Security.