Can China Help Create Strategic Stability on the Korean Peninsula? 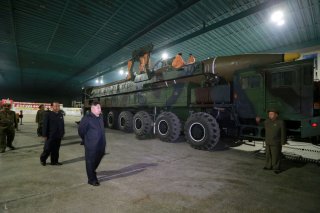 A long-term solution to calm down political tension and reduce the risk of war on the Korean Peninsula could be envisioned by employing the concept of strategic stability. Borrowing from Thomas Schelling and Robert Ayson such stability is defined here as a situation in which the incentives on both sides to initiate war or an arms race are outweighed by the disincentives. This article suggests a solution for such strategic stability on the Korean Peninsula by offering China a position of a “symmetrifier” that helps create symmetrical disincentives for military aggression and arms race.

To create strategic stability, we must think of ways to deter aggression without incentivizing an arms race by threatening the legitimate security interests of our enemies. We should not think like the U.S. Strategic Air Command Commander-in-Chief, General Curtis LeMay did just before the Cuban missile crisis. He felt that deterrence means an ability to achieve “conditions wherein the enemy cannot impose his will on us, but we can impose our will on him.” The deterrence that enabled the U.S. to impose its will on its enemies threatened the legitimate interests of the Soviet Union and led to an arms race and a horizontal expansion of Soviet military power.

Strategic stability requires differentiation between legitimate and illegitimate security interests. It requires a structure in which neither side can impose its will within the other’s sovereign territory. If one of them can, the other will have greater incentives that disincentive measures that lead to an arms race or situations like the Cuban crisis of 1962.

Strategic stability in the nuclear age is guaranteed by the mutual ability to punitive second strikes. Yet, if all countries have nuclear second-strike capacities, an irrational state could use it for unprovoked aggression. Also, accidental wars would be likely in such a situation. Furthermore, there is a risk that a nuclear power could use its force to blackmail non-nuclear powers. The need to prevent North Korean nuclear blackmail is what some South Koreans present as an argument for independent or shared U.S.-South Korean nuclear capacity. North Korean officials, again, have used this logic in support of the country’s independent nuclear capacity against “U.S. nuclear blackmail”.

To create strategic stability on the Korean Peninsula, one would need to create a situation where both South and North Koreans could be protected by nuclear deterrence in a way that would not increase the likelihood of trigger-happy militarism. This could be possible with a special dual-key arrangement. U.S. nuclear weapons could only be used in defense of South Korean sovereignty on the Korean Peninsula under a NATO-style nuclear sharing arrangement. Such an arrangement would make the use of nuclear weapons possible only if both the US and South Korea agree to this.

This arrangement would satisfy the minimum requirements of the Non-Proliferation Treaty by denying non-nuclear powers independent nuclear weapons. Yet, it would offer Koreans symmetrical protection under a nuclear umbrella. Since the NPT also stipulates on the reduction and demolition of the nuclear arsenals of the nuclear powers, the matter of Chinese and American nuclear capabilities should also be included in the negotiation for long-term strategic stability of the Korean Peninsula.

Timo Kivimäki is a Professor of International Relations at the University of Bath, in the United Kingdom.