Can Moon Jae-In Bridge the Gap between Donald Trump and Kim Jong-un? 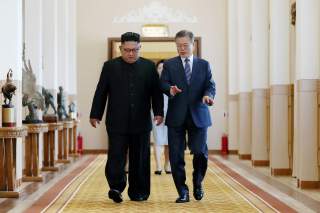 Neither summit—in Singapore last year, in Hanoi this year—returned a major breakthrough. The premise of such summits was that a leader-level meeting could punch through the diplomatic morass which usually surrounds negotiation with North Korea. Unlike the last big effort—the Six Party Talks—there would be no intermediaries. Trump and Kim could meet personally, directly negotiate an end to tension, and start making swaps—missiles and nuclear warheads in exchange for sanctions relief and aid being the most likely trade.

It appears that some variant of this sanctions-relief-for-denuclearization deal was on the table at Hanoi, but it fell through. Press reports suggest that—as is so often the issue in negotiation with North Korea—sequencing was the problem. That is, the two sides could not agree on which one would move first. Trump apparently asked for nearly all of the North Korean program up front with vague promises of aid and normalization to come. Kim inverted that script and asked for sanctions relief up front in exchange for shuttering one aging nuclear facility. With the gap so wide between them, the meeting broke up early.

Trump now likely perceives himself to have been burned twice on North Korea. He has endured heavy criticism over both his summits—that he gave the first summit away for nothing, that he has legitimated Kim as a world leader, that he did not prepare for the summits and simply parachuted in, and so on. At Hanoi, he even told the press that he was wary of a “bad deal” because of the critical response he would receive from the commentariat. Trump is unlikely to meet Kim again unless he be assured of good—or at least decent—deal. And with the 2020 election campaign coming up, Trump will be searching for a clear foreign-policy win for his North Korea efforts.

Kim Jong-un, for his part, has given the United States a year-end ultimatum to change its stance toward the talks. After twenty-seven months of back-and-forth with North Korea, little seems to have changed.

Here, then, is Moon’s opportunity. Both parties seem open to a deal. Trump prides himself on being a dealmaker and negotiator. Kim, unlike his father, seems to be looking for an accommodation with the outside world. But the strategic and ideological gaps between the United States and North Korea remain large. The South Korean Left—from which bloc Moon comes—has long sought to play a mediating role between the United States and North (unlike the South Korean right which is more openly pro-American). Now is Moon’s chance.

Moon’s proposal to meet Kim Jong-un for a fourth inter-Korean summit is probably the best way forward, and it appears Trump agrees—or at least he does not object to it. But process is not progress, and ultimately, Moon has to claw something substantive out of Pyongyang for the Americans. Missiles and nuclear warheads are the core issues at stake. North Korea wants to change the subject and instead discuss inter-Korean détente, shared cultural and sporting events, inter-Korean solidarity against foreign intervention, or just about anything else. But if Moon cannot get movement from Kim on core question of North Korea’s nuclear-tipped intercontinental ballistic missiles (ICBMs), then the American track of Moon’s détente effort will likely grind to halt. After two photo-op summits, Trump needs more to fend off his domestic critics and work up a foreign-policy success for the campaign.

Moon’s offer will be sanctions relief. As at Hanoi, the North will try to give up facilities and inspectors instead of weapons. The Americans will reject that offer, so Moon must also. Then we will learn just how serious the Kim clan of North Korea really is about denuclearization. Will they offer something more? My own sense is that sanctions relief is not enough for the North Koreans to surrender warheads or ICBMs.

Moon will then be in a very difficult spot. Trump is only moderately vested in improving relations with North Korea. His attention span is short, and his interests change quickly. As the 2020 campaign and Democratic investigations heat up, he will have less and less interest in this. The post–2016 sanctions regime, which has caused so much North Korean pain, will increasingly settle in.

Moon will then have to choose whether or not to pursue détente against U.S. wishes. As a sovereign state, South Korea can, of course, choose whatever it wants, but the alliance is very popular here. If Moon opts for an open breach with the Americans to pursue a North Korean deal, then he will likely face conservative street opposition. And if the North Korean end-of-2019 ultimatum is real, then Moon has only eight months to figure this all out.

The South Korean Left has long sought a foreign-policy profile for Seoul as a middle power, one that is distinct from the United States and able to arbitrate among competing powers in northeast Asia. The next eight months will be a test of whether the Republic of Korea is ready to do that.