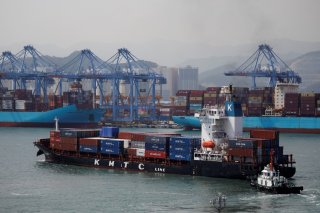 Over the course of the nearly two-year-long coronavirus pandemic, South Korea has witnessed roughly six hundred eleven thousand cases and five thousand three hundred deaths, according to the latest data compiled by the Korea Disease Control and Prevention Agency (KDCA).

The loss of life is indeed tragic, but the health crisis has also negatively affected the East Asian country’s economy, as data from the third quarter have shown that strong exports were offset by weak domestic consumption due to the nation’s stringent coronavirus restrictions on businesses and social gatherings.

“While Korea’s recovery lost some momentum last quarter as the virus weighed on growth, the economy should pick up pace again this quarter as high vaccination levels allow the rolling back of containment measures,” Alex Holmes, Asia economist at Capital Economics, told the Financial Times.

The Bank of Korea has forecast growth of around four percent for this year due to robust export figures.

“The external environment has also admittedly turned more uncertain amid growing concerns about a sharper slowdown in mainland China, as well as disruptions to global supply chains,” Krystal Tan, economist at ANZ, told the paper.

“Still, we do not expect a major loss in momentum as the economy continues to open up and fiscal support will remain through 2022,” she continued.

Other analysts are expecting South Korea’s strong exports will be driven mainly by memory chips and electronic devices.

“We believe that sufficient vaccine supply and South Korea’s capacity to quickly rollout booster jabs will ensure a recovery in private consumption and business investment spending,” Fei Xue, an Asia analyst at the Economist Intelligence Unit, told The Korea Herald.

“A tight labor market and upward pressure on wage growth will also boost domestic demand, which will offset a deceleration in goods export growth—overall we expect steady economic expansion in 2022, with real gross domestic product increasing by 2.8 percent,” he added.

Jacob Kirkegaard, a nonresident senior fellow at the Peterson Institute for International Economics, told the paper that the global supply bottleneck, a major hurdle for exporters, will likely be resolved in the semiconductor sector over the next several months.

“This will naturally also affect the important South Korean semiconductor sector, which having had very strong export earnings in recent quarters, should slow down in the near term as global supply picks up, and could potentially suffer from a bust in the medium term like the rest of the industry,” he continued.

Meanwhile, per KBS World, South Korea’s economy is still projected to continue to rank the tenth largest worldwide for a third consecutive year in 2022 in terms of nominal gross domestic product (GDP), data from the International Monetary Fund have revealed. Asia’s fourth-largest economy’s nominal GDP is expected to amount to $1.82 trillion this year and $1.91 trillion next year.

The International Monetary Fund (IMF) is predicting that the South Korean economy will grow 4.3 percent this year and 3.3 percent next year.