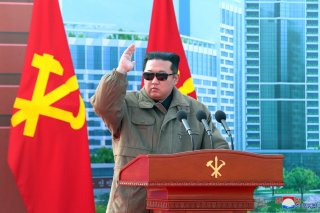 Last week, South Korean president Moon Jae-in lauded an agreement his government reached with Washington. In an interview with several news services, he announced: “the Republic of Korea and the United States have now concurred on the wording of an end-of-war declaration to be presented to North Korea. Even China supports this declaration.”

He admitted that “It would be too physically demanding to reach a declaration to end the Korean War before the end of my term,” but he desired to “make conditions ripe for an end-of-war declaration and pass that on to the next administration.” In his view “An end-of-war declaration is useful since it signifies a process to promote mutual trust and a move toward denuclearization and the institutionalization of peace on the Korean Peninsula while putting an end to hostile relations.”

Great sentiments, of course. However, who imagines “mutual trust and a move toward denuclearization and the institutionalization of peace” involving North Korea are imminent? The barriers to such a course are many.

The first is South Korea. The bitter presidential election looks to be close, with the leader fluctuating. Victory by the opposition, which is advocating a much tougher position toward the North, makes détente between the two less likely and a violent outburst by Pyongyang inevitable. The last notable military action was in 2010, when naval and artillery attacks pushed South Korea to the brink, during the presidency of conservative Lee Myung-bak. Pyongyang rejected a demand for an apology years later.

In contrast, policy continuity is likely if the governing party wins. However, since the collapse of the Hanoi Summit in February 2019, North Korea’s Supreme Leader Kim Jong-un has had nothing to do with Moon, despite the latter’s desperate attempts to maintain a dialogue. Indeed, the North blew up the liaison office constructed by Seoul to encourage negotiation, a humiliation that would be shocking if committed by anyone other than the Democratic People’s Republic of Korea.

The second is the United States. The Biden administration has indicated that it desires negotiation, but has attracted no interest in Pyongyang. This might be because Washington has offered no inducement to talk and maintained its demand for denuclearization. Or it might be because Kim has decided to bulk up his nuclear and missile arsenals before engaging the United States. In either case, nothing is likely to change until the North sees profit in talking.

That probably won’t be occurring in the coming year or two. Kim likely sees the Biden administration as only short-term, and not worth dealing with. And it probably isn’t. For Biden, North Korea is a middling priority. Reported Ryo Nakamura of Nikkei: “An administration insider says that while working-level officials in charge of North Korea policy recognize the need to change the approach, they are having a hard time trying to convince senior policymakers.”

Even if Biden is not formally replicating the Obama administration’s policy of irritated disinterest, oft-labeled “strategic patience” by others, that is what his policy looks like. It is a near certainty that Biden will be even more distracted in 2022 than in 2021—a potential war in Europe, concern over China and Taiwan, continuing negotiations with Iran over resuscitating the nuclear agreement, increasing attacks on U.S. forces in the Middle East, rapidly approaching midterm elections, and increasing Democratic political disarray. Absent a nuclear test, perhaps, will the Biden administration even notice what happens on the Korean peninsula?

The third is Donald Trump. Improbably, he remains in contact with Kim, or at least claims to be, according to Maggie Haberman of the New York Times. Haberman notes: “You know, what he says and what's actually happening are not always in concert … but he has been telling people that he has maintained some kind of either correspondence or discussion with Kim Jong-un.”

Jenny Town of 38 North suggested that this might mean as little as Trump sending notes which received no response. However, she warned that “if it’s true, and there is communication taking place on anything of substance without coordination or consultation with the White House, it could be highly problematic and potentially counterproductive to US interests.” At its worst, Trump could suggest that Kim wait to deal with the United States upon the former president’s triumphant return to the White House in 2025. That might resonate in Pyongyang, given Biden’s political difficulties and Trump’s diplomatic ineptitude.

The fourth is China. Contrary to a standard hawkish talking point, Beijing has never controlled the North. During the Cold War, the Democratic People’s Republic of Korea (DPRK) balanced the Soviet Union against the People’s Republic of China (PRC) and in the mid-2010s made little effort to hide its disdain for the latter when the Xi government signed onto, and, even worse, enforced, new UN sanctions. However, a deteriorating relationship with Washington appears to have brought Beijing and Pyongyang together. Even seven North Korean missile tests in January shortly before the opening of the Beijing Olympics went unremarked by China.

Having survived the last two years of economic isolation, the DPRK appears able to persevere with its ambitious military build-up despite the lack of sanctions relief. And the PRC appears to be playing the role of essential backup, ensuring sufficient energy and food exports to preserve the Kim regime. So long as Xi has Kim’s back, Pyongyang can choose when—and even whether—to return to engagement with South Korea and the United States. Unfortunately, the current state of U.S.-China relations makes cooperation over the North unlikely.

The fifth is everyone else. Although the United States brought together Japan and South Korea for ministerial talks in Hawaii, which yielded a predictable resolution urging the North to stop misbehaving and start talking, Tokyo and Seoul are barely on speaking terms. Although both South Korean presidential candidates have expressed support for improving relations with Japan, the latter seems less interested in making the concessions necessary to reach agreement. Moreover, talks between Tokyo and Pyongyang broke down years ago over the North’s failure to fully account for Japanese citizens kidnapped and taken to North Korea. Yet the DPRK’s confrontational stance makes it even more important for an increasingly assertive Japan to directly engage North Korea.

Russia plays only a modest role in Korean affairs but could reinforce pressure from Pyongyang’s other neighbors to negotiate over arms control if not denuclearization. However, with Washington and Moscow at sharp odds even before the Ukraine crisis, the Putin government is unlikely to do much to ease America’s difficulties or inconvenience the North.

President Moon is undoubtedly sincere in his devotion to “a process to promote mutual trust and a move toward denuclearization and the institutionalization of peace on the Korean Peninsula while putting an end to hostile relations.” But is anyone else? Especially Kim, who is the ultimate “decider” when it comes to North Korean disarmament.

Thoughts of mutual trust, denuclearization, and peace appeared far from his thoughts at North Korea’s December communist party plenum. According to a statement released by the North, Kim announced: “The military environment of the Korean peninsula and the trend of the international situation getting instable [sic] day after day demand that bolstering the state defense capability be further powerfully propelled without a moment's delay.” Seven missile tests involving nine missiles quickly followed.

The alacrity with which Kim adapted to international summitry suggested that he was more worldly than his father and grandfather, giving rise to optimism about his willingness to choose a different future. His dramatic return to missile testing, and hints that he may be ready to drop his suspension of nuclear and long-range missile tests, suggests that he is more ambitious than his forebears. And that leads to corresponding pessimism that he is determined to choose a very different future than that envisioned by Moon.

North Korea already is a nuclear power. The most important question today is whether it is possible to prevent it from becoming a serious mid-level nuclear power whose aspirations no longer can be ignored.