The Case for U.S. Technology Cooperation in South Korea 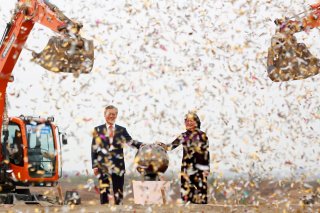 With most Americans preoccupied with the imminent presidential election, the coronavirus pandemic, and other national concerns, few likely noticed a recent session of the U.S.-Republic of Korea Energy Security Dialogue. And considering the grave threat of North Korea’s nuclear weapons—and, indeed, its massive conventional artillery forces, which one U.S. think tank estimates could inflict up to 250,000 casualties in Seoul—it isn’t surprising that most analysis of the U.S.-South Korea alliance focuses on North Korean leader Kim Jong-un and on deterring and managing Pyongyang. Yet with American foreign and security policy increasingly directed toward twenty-first-century great-power competition and especially the U.S.-China rivalry, Washington would do well to think more broadly about the U.S.-Korea relationship and its role in American strategy. Technology cooperation could and should play a more significant part in U.S. engagement with Seoul—including collaboration in developing new energy technologies.

South Korea is unlikely to be a simple partner in a world dominated by U.S.-China competition. Not unlike pre-2104 Ukraine, Seoul is in the unhappy position of relying heavily on the United States for its security while being deeply engaged economically with a nearby U.S. geopolitical opponent—in Korea’s case, not Russia but China. There is one important difference, of course: South Korea has a mutual defense treaty with the United States, which Ukraine lacked, and which provides Koreans with much greater confidence of U.S. support in extremity. Nevertheless, Korea’s security policy and its foreign trade and investment policy are not fully aligned, a situation that generates difficult choices for senior officials in Seoul and is likely to continue doing so for quite some time.

Polling demonstrates that South Koreans increasingly see China as a security problem, and overwhelmingly (78 percent) want their government to give priority to Korea-U.S. relations over Korea-China relations. But reflecting their nation’s competing imperatives, South Koreans are understandably divided on how to manage the China challenge. Thus, in a 2019 survey, 44 percent favored cooperation and 46 percent endorsed efforts to limit China’s power. For comparison, among Americans, about 90 percent of respondents in a spring 2020 Pew Research Center poll saw China’s power and influence as a threat to the United States, with 62 percent calling it a “major threat.” A Harris poll at roughly the same time found 50 percent of Americans surveyed thought President Donald Trump should take a “tougher” position on China, with just 17 percent favoring a “softer” position. The remaining 33 percent wanted “the same”—a policy that already included a vigorous if inconclusive trade dispute, though not yet the strong rhetorical denunciations that have become a prominent element in the Trump administration’s post-coronavirus China policy.

Economically, however, South Korea is highly dependent on China. The country imported $107 billion in goods from China in 2018 while exporting $160 billion there, with much of the trade occurring in high-tech goods like integrated circuits. In contrast, South Korea imported just $55.8 billion in goods from the United States (its second-largest trade partner) and exported products valued at $73.1 billion to America. Total turnover in the Korea-China goods trade was thus roughly double that of Korea-U.S. trade six years after the U.S.-Korea Free Trade Agreement entered force in 2012; including Hong Kong, which Trump has declared is no longer considered autonomous from China under U.S. law, makes the U.S.-China balance in Korea’s trade even more lopsided, adding $44.5 billion in South Korean exports and $2 billion in imports, with integrated circuits comprising some 68 percent of South Korea’s exports to the former British colony in 2018. The smaller Korea-U.S. services trade tilts in America’s favor, though there is little basis in scarce Korea-China services statistics to think that it outweighs China’s much greater merchandise trade.

In these circumstances, Washington should be looking for ways to deepen U.S.-Korea economic engagement, not merely as an avenue to greater mutual prosperity and a closer relationship, but as a means to gradually reshape the environment in which Korea’s leaders and people think about their country’s international ties. The Trump administration has engaged Seoul on U.S.-Korea trade, and specifically on energy, but has focused largely on reducing the U.S. trade deficit and selling additional American liquified natural gas (LNG) to Korea, which became the largest importer of U.S. LNG in 2018 and recently committed to an additional $9.6 billion in imports between 2025 and 2039. Yet while each of these steps may be desirable, neither is sufficient.

The problem is that U.S.-China competition is not merely economic, but technological. The Trump administration recognized this in its 2017 National Security Strategy and has pursued technology competition with gusto in its assault on the Chinese telecommunications firm Huawei, a major focus of Secretary of State Mike Pompeo’s recent trip to Central Europe. Democratic presidential candidate Joe Biden has similarly emphasized technology’s role in the U.S.-China competition, including in his “Made in All of America” campaign statement, which stresses China’s expanding investment in research and development and the danger that “by some estimates, China will overtake the U.S. in R&D spending in 2020.”

This makes clear why efforts to boost the U.S. role as a commodity exporter—an aspect of Russia’s power that U.S. politicians have often derided—fall short of what is necessary. Additional energy exports, and revenues, are certainly desirable. But it was America’s power to innovate that prevailed over the Soviet Union’s five-year plans, not the quantitative volume of U.S. commodity production.

This is also why China’s unfair trade and investment practices—policies that an expert at the Information Technology and Innovation Foundation (ITIF) began to describe as “innovation mercantilism” almost ten years ago—are so damaging. And, as other ITIF staff have demonstrated in recent work, many of America’s allies are more vulnerable than the United States to China’s “Made in China 2025” strategy, which aims to use various forms of state support to win increasing shares of global markets in advanced technology sectors. In fact, by cross-indexing various countries’ dependence on manufacturing value-added (as a share of GDP) with the importance of their high-tech industries (as a share of manufacturing value-added), ITIF shows that South Korea is the nation most threatened by China’s innovation mercantilism policies.

ITIF urges a more effective and more coordinated U.S.-EU-Japan effort to “compel [China] to more faithfully abide by the global, rules-based trading system”—a worthy objective. Considering that the United States, the EU and Japan are three of the world’s four largest economies (and that China is the remaining member of this group), these three parties are also a logical place to start. Given South Korea’s role as a U.S. ally in a strategic location, Washington should also do much more to integrate South Korea into efforts like this while also working to expand bilateral technology cooperation.

Energy technology is especially important for several reasons. First, global energy systems are evolving at a rapid pace, with substantial changes underway in how nations produce and use energy. This reflects a combination of climate-driven efforts to promote clean energy—something that the European Union, Japan, and South Korea are seeking to do, as are many U.S. states—with market-driven transformations. America’s power markets are a compelling example of the latter dynamic; falling costs of natural gas and wind generation are producing record levels of output from these two sources while resulting in similarly historic cuts in coal-fired generation. This rapid change in global energy markets creates great opportunities for the United States and American researchers, firms and workers to lead a global energy transformation.

Second, energy technologies have profound national security implications. A recent report by the National Commission on Grid Resilience highlights burgeoning security threats to the U.S. electric power system as does the U.S. Department of Energy’s recent decision to seize an imported Chinese transformer and study it at the Sandia National Laboratories. America’s allies in Europe and Asia—including South Korea—face their own cyber and other dangers. Through its intimate connection to nuclear weapons, nuclear energy poses a different set of security challenges, especially that of nuclear weapons proliferation. Though it is a topic of debate, some advanced reactor designs seem likely to be more proliferation-resistant than existing nuclear power systems. Energy technologies can also have military applications, ranging from powering bases, ships, vehicles and aircraft to facilitating new weapons, like directed-energy weapons.

Finally, safe, affordable, secure and reliable energy is an essential foundation for the rest of America’s economy, contributing importantly to U.S. competitiveness. While the United States obviously also competes economically with its allies, and they compete with one another, America and its close partners are simultaneously competing with China. What is different about these various competitive relationships is that generally speaking, the United States as well as the EU, Japan, South Korea, and other U.S. allies follow established rules and norms in the global economy. Where they do not, they typically submit to established dispute resolution mechanisms. Beijing has systematically abused and/or failed to enforce trade and investment rules and norms; according to the 2017 update to the bipartisan Commission on the Theft of Intellectual Property, China’s IP theft alone costs the United States alone from $225 billion to as much as $600 billion per year. At the same time, competitive economic pressures among the United States and its allies may also diminish to some extent the scale of China’s domestic market, China’s mercantilist practices, and other factors drive consolidation of multinational corporations trying to compete with Chinese state-owned firms.