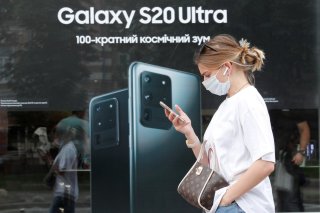 In February, Samsung dominated the rankings of the best-selling 5G Android smartphones, taking the top four spots and five spots out of the top ten, Counterpoint Research reported.

According to Counterpoint Research, Samsung’s Galaxy A52s 5G was the top 5G Android smartphone worldwide during February, followed by the Galaxy S22 Ultra 5G, Galaxy S21 FE 5G, and Galaxy A32 5G. According to the firm, the A52s 5G model was also the top-selling smartphone in January, with the newer S22 joining it in February.

Overall, Samsung captured 24 percent of the global 5G Android smartphone market. And the Android segment as a whole grabbed 67 percent of global 5G sales in the month in question.

The Oppo Reno 7 5G, available only in China, came in fifth. The Honor 60, the Vivo S12, the Xiaomi Redmi K40, and the Honor X30 finished sixth through ninth. The Samsung Galaxy A22 5G took the tenth spot.

The rankings were very spread out, with the top smartphone, the Samsung Galaxy A52s 5G, earning only 2.90 percent market share.

“5G has become a standard offering in China with 5G penetration in the country being 83% in February 2022. vivo, OPPO, Xiaomi, and HONOR are the top 5G Android players in the Chinese market,” the report said. “These brands are further expanding their 5G portfolios in the emerging markets of APAC and MEA. After separating from Huawei, HONOR is increasing its presence across price bands and focusing on the premium segment as well, with expansion plans for Europe and Asia.”

Last month, CNET predicted what Samsung might be bringing out this year regarding smartphones, listing the Galaxy Z Flip 4 and Z Fold 4 as models  they want to see in 2022.

“Samsung's Galaxy Z Flip 3 is the most practical foldable phone available right now. But it comes with some important compromises when compared to Samsung's nonfolding Galaxy phones, particularly around the camera and battery life,” CNET reported. “If Samsung keeps with its current pattern, we could see another Z Flip 4 in August that will hopefully address those shortcomings. There aren't many rumors about the Z Flip 4 yet, aside from a report from Korean news outlet The Elec indicating that Samsung's next flip phone will have a slightly larger cover screen.”

The report also predicted that Samsung might be releasing an update of the Galaxy Watch, new Galaxy Buds, and a new foldable product not previously seen among Samsung’s existing products.

"Only Samsung knows what's next in its pipeline. But considering competitors like TCL are also publicly experimenting with new foldable designs, it wouldn't be surprising to see another idea from Samsung in the near future,” the report said.