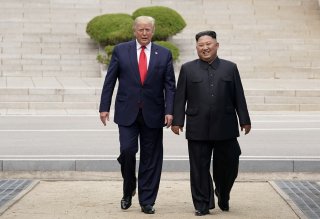 At a time when U.S.-North Korea diplomacy and inter-Korean relations are in dire states, it may be absurd to even pontificate about the possibility of another summit between President Donald Trump and North Korean leader Kim Jong-un. Neither Washington nor Pyongyang has demonstrated in public that more summitry is a feasible option over the short term. Even Deputy Secretary of State and North Korea envoy Stephen Biegun threw cold water on the idea, telling the German Marshall Fund this week that "it’s hard to envision circumstances where we could do an in-person international summit.” Add the coronavirus pandemic to the mix and the entire concept looks far-fetched, if not outright farcical.

And yet because Trump is such an unpredictable politician with a flair for the dramatic, nobody can sit in their home-offices and prognosticate about what he may or may not do with a high degree of confidence. The personal relationship between Trump and Kim looked to be on thin-ice after the diplomatic fallout from Hanoi, when both men flew back to their capitals without even a manufactured joint statement in their pockets. But four months later, Trump and Kim met again in a spontaneous, slapdash get-together by the Demilitarized Zone. Who knows what Trump is thinking on a daily basis?

It’s not as if Trump wouldn’t like to continue talking with the North. Over the last 12 months, the administration has expressed its interest in preserving channels of communication with Pyongyang. National Security Adviser Robert O’Brien said so himself during a June 30 webinar at the Center for the National Interest, where he insisted "the door to dialogue and progress remains open.” This is the kind of remark senior national security officials use as a placeholder when things aren’t going particularly well. But it at least sends a small signal to Pyongyang that the White House remains ready and willing to return to the table if, in fact, Kim wants to get back to business.

The one individual who unquestionably hopes diplomacy thaws out from its deep freeze is South Korean President Moon Jae-in, who has banked his political and personal legacy on reconciliation with the North and has very little to show for his valiant efforts outside of a joint inter-Korean deescalation agreement Pyongyang was threatening to discard up until last week. Moon has always been driven by a sense of urgency on the inter-Korean peace file. He spent part of his July 1 videoconference with European Council President Charles Michel pleading for a return to the exciting summitry of the past. "I believe there’s a need for North Korea and the United States to try dialogue one more time before the U.S. presidential election,” Moon observed. The Blue House reportedly reiterated this messaging to the Trump administration shortly thereafter, an indication Moon’s remarks weren’t for posterity.

Regrettably, for Moon, he is in a weak position to make another Trump-Kim summit happen. As determined as he is to make history on the Korean Peninsula and put an end to the 70-year-old Korean War for good, he is only one man with limited power. Hemmed in by a U.S. and U.N. Security Council sanctions regime that obstructs even the most mundane inter-Korean projects, the Moon government is at best a supporting actor to the main event. If another Trump-Kim summit is even within the realm of possibility, the ultimate decision will be determined by Trump and Kim—not Moon.

Would Kim be open to a 4th meeting with his pen-pal in the White House?

If KCNA commentary and statements from Kim regime underlings are anything to go by, the answer is a “no.” It’s difficult to describe in words how detrimental Hanoi was to the overall tenor of U.S.-North Korea nuclear diplomacy. Biegun’s one-day session with the North Korean delegation in Stockholm ten months ago, which Pyongyang was apparently determined to make a failure before the two teams landed in Sweden, didn’t help matters. A month after that meeting broke down, North Korean negotiator Kim Kye Gwan all but declared direct, top-down diplomacy with Washington under the present circumstances a no-win situation for the North. The only person who gained from such diplomacy, Kim said, was Trump himself. “As we have got nothing in return, we will no longer gift the U.S. president with something he can brag about.” North Korean Foreign Minister Ri Son Gwon went a step further with those remarks on June 11, when he dragged Trump’s name through the mud (without naming him, of course) and explained that “never again” would the North "provide the US chief executive with another package to be used for achievements without receiving any returns.”

To the Kim regime, the last 2 years have been filled with nothing but empty promises and hot air. What would be the point of another televised sit-down, where Trump could once again use the spectacle to project himself as world-class statesman and dealmaker?

In his heart of hearts, Trump likely wouldn’t have a problem with more flashy summitry. A high-stakes head-to-head matchup would produce at least a week’s worth of media coverage and help distract the country (at least for a short while) from the 87% rise in covid-19 cases, controversy over Trump’s behavior during phone calls with world leaders, #BountyGate and every other scandal burning through the administration. Trump knows how to manipulate the media and create diversions. What better diversion from the bad poll numbers against Democratic presidential nominee Joe Biden than a “Nixon to China” moment during an election year?

Naturally, there are major downsides for Trump as well. If a hypothetical meeting with Kim was the same, old optical illusion that so many have gotten used to, the president could open himself up to a whole new slate of attack ads on his competence and record.

Right now, all of the above is just an entertaining exercise in speculation. Back on planet earth, the chance of a Kim-Trump summit being scheduled before the U.S. presidential election is about as slim as yours truly landing a columnist position with the Washington Post. For both Trump and Kim, the pros of another “made for TV” blockbuster aren’t worth the list of cons— including criticism from hardliners back home if both come back without any concessions.

Trump and Kim, however, have rolled the dice with each other before. We shouldn’t presume they aren't willing to do so again if the environment changes.