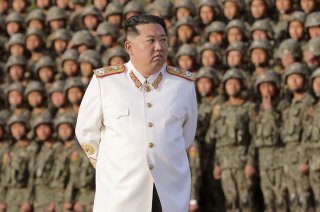 For more than two years, North Korea claimed to have zero cases of the coronavirus, listing a number of zero cases in regular reports to the World Health Organization. All of a sudden, earlier this month, the North Korean regime revealed its first such case. Now, it’s revealed a lot more.

According to the Associated Press, which cited North Korean state media, North Korea "confirmed 15 more deaths and hundreds of thousands of additional patients with fevers." the report stated that there have now been 42 deaths from the current "fever"—the regime is believed to lack the ability to definitively test for coronavirus—with a total of 820,620 sick.

"Without COVID-19 test kits, North Korea is resorting to body temperature checks to guess at infections. But with such a very inferior and inaccurate method of examination, it's impossible to find asymptomatic virus carriers and control viral surges," Cheong Seong-Chang at South Korea's Sejong Institute told the AP.

Meanwhile The Guardian, also citing North Korean state media, reported that Kim Jong-un has called in the army to deal with the crisis, demanding that they work on "immediately stabilizing the supply of medicines in Pyongyang."

"Officials of the Cabinet and public health sector in charge of the supply have not rolled up their sleeves, not properly recognizing the present crisis," the newspaper said, citing KCNA.

"While visiting a pharmacy, Kim Jong-un saw with his eyes the shortage of medicines in North Korea," Cheong Seong-jang, the researcher, told the outlet. "He may have guessed but the situation may have been more serious than he had expected."

According to Yonhap News Agency, President Yoon promised that "we must not hold back on providing necessary assistance to the North Korean people, who are exposed to the threat of the coronavirus." The remarks came during Yoon’s first budget speech to the National Assembly.

"If the North Korean authorities accept, we will not spare any necessary support, such as medicine, including COVID-19 vaccines, medical equipment and healthcare personnel," Yoon added.

North Korea, at least up until now, has refused most help from outside the country, including vaccines.

President Joe Biden will be visiting the region next week, a trip that will include a meeting with Yoon. Reuters reported this week that Biden may visit the Korean Demilitarized Zone on his visit. President Donald Trump visited the zone in 2019 and even briefly crossed into North Korea, the first president to do so.