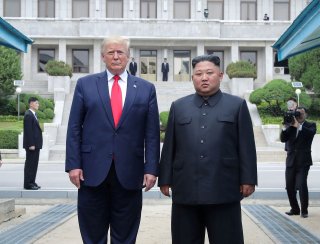 The prospect of another summit between President Donald Trump and North Korea’s Supreme Leader Kim Jong-un has improbably risen from the dead, a bit like Lazarus. Unlike the Biblical figure called forth by Jesus, the Korean deal isn’t out of the tomb yet, but both sides are signaling their interest in a pre-election get-together. With the U.S. election less than four months away, it will take a serious effort to do the groundwork necessary to make such a meeting a success.

Trump entered the Oval Office critical of many of Washington’s usual foreign policy nostrums. Although he decried the “endless wars” of the Middle East, he veered toward military confrontation with the North in fall 2017, threatening “fire and fury” in response to the usual North Korean posturing. South Carolina’s Lindsey Graham, who never met a war he didn’t want other Americans to fight, suggested that Trump might just nuke the Democratic People’s Republic of Korea. After all, any conflict would be “over there,” said Graham, not “over here.” So, in his view, mass death would be no big deal.

Such thinking did not comfort South Koreans, whose country would be a battleground. Then to the almost uniform horror of members of the Blob, as former Deputy National Security Advisor Ben Rhodes called the D.C. foreign policy establishment, Trump agreed to a summit with Kim. Virtually none of the usual suspects believed that any president, especially Trump, should talk directly to Kim. Their greatest fear was that the two leaders might reach an agreement. Ultimately, the improbable 2018 meeting yielded more potential than reality. However, bilateral tensions dramatically eased, and the two sides were talking.

Alas, the president still insisted that Pyongyang turn over all its nuclear weapons before receiving sanctions relief, a view pushed by National Security Adviser John Bolton, who vocally backed the “Libya solution” almost certainly in an attempt to frighten away Kim. Yet, most analysts believed that the North would never yield its weapons. And certainly not before receiving some benefits in return. Moreover, Kim saw the fate that befell Libya’s Muammar Gaddafi after he surrendered his missile and nuclear programs. Kim would not make the same mistake.

The result was deadlock at the Hanoi summit two years ago. Reports indicate that Trump temporized between making a small deal involving a peace declaration and liaison offices plus some sanctions relief in exchange for some denuclearization and acting tough by walking away. Influenced by Bolton, whose memoir stated his horror that the president considered signing a deal, Trump did the latter, embarrassing Kim and essentially ending negotiations. Since then, the North has denounced the very idea of more talks. While Pyongyang’s policy was being reset, North Korean diplomats largely cut off contact with their counterparts around the globe, especially Americans, official and unofficial.

Yet, playing hard to get seemed to get results for Pyongyang. South Korea’s President Moon Jae-in responded to the North’s constant insults and rebuffs by revamping his national security team to emphasize engagement. He also proposed that South Korea’s National Assembly, in which his party holds a big majority, “institutionalize” the inter-Korean agreements. Moreover, the body’s Speaker, Park Byeong-seug, proposed to meet with the head of the North Korean People’s Assembly and “hold an inter-Korean parliamentary meeting.”

Even more significantly, there are signals from the Trump administration—a bit mixed but still generally positive—that there is interest in concluding a deal, probably capped with a third summit. Secretary of State Mike Pompeo seemed to dampen expectations when he talked of “a senior discussion” rather than Trump-Kim summit, but the president indicated his openness to the latter and White House officials since have spoken of the possibility.

Making everything happen before November 3—what looks ever more likely to be an election loss that would turn Trump into a lame duck—will not be easy. Furthermore, because U.S.-China relations are in a freefall, Beijing is more likely to harm than aid any negotiations with the North. However, the attempt would be worth the effort.

A President Joe Biden is likely to be much more conventional in terms of dealing with Pyongyang. He said that he is prepared to meet with Kim, but only with conditions. Which almost certainly means an accord ready for signature. That seems likely to be weighted towards a traditional insistence on full-scale denuclearization, given the Obama administration’s professed determination not to “buy the same horse twice.”

Moreover, it would take time for a new Biden administration to staff up, decide on policy and reach out to North Korea, especially since the Korean peninsula would not likely be the incoming administration’s priority. China would be a major challenge starting on January 20. With Iranian President Hassan Rouhani’s term running out, a revival of the nuclear deal would be more urgent, likely heading Biden’s foreign policy list. Afghanistan, Libya, and Yemen remain active conflicts—all potential crises ready to explode. Of course, being pushed to the back of the line might incline Pyongyang to cause mischief to ensure prompt attention: an intercontinental ballistic missile launch and/or nuclear test would be obvious options.

Even the Trump administration apparently realizes that it needs to try a new approach to move talks forward. It should emphasize deliverables with both symbolic and practical value. Some obvious topics: recovery of the remains of American military personnel; accelerated meetings of divided families; end of U.S. travel bans both to and from the North; formal agreement restricting missile/nuclear tests and military exercises; all-party peace declaration with plans to negotiate a formal peace treaty; and establishment of liaison offices, with the opportunity to upgrade to formal diplomatic relations.

Most important would be to begin the process of step-by-step denuclearization in return for sanctions relief. White House officials have told Harry Kazianis, head of Korean Studies at the Center for the National Interest, that they are considering offering a “customized package of sanctions relief” in return for taking specific denuclearization steps. No one should have any illusions that CVID—Complete, Verifiable, and Irreversible Denuclearization—is remotely possible. However, individual actions, such as destruction of the Yongbyon facilities, as proposed by the North in Hanoi, freeze on production of nuclear materials, delivery of a nuclear inventory, and reintroduction of IAEA inspections, would be useful. In return, the United States could offer some sanctions relief, weighted toward steps that would encourage inter-Korean cooperation and projects. Kazianis said that his sources stated they “are willing to trade concession for concession, and are willing to put a lot of new things on the table and truly get creative and take some risks we have not in the past.” That is significant, if true.

An agreement would need to be reached before any summit, which won’t be easy, especially since Trump would have essentially nothing to do with the details while Kim would insist on approving every provision. Nevertheless, with the election fast approaching, both leaders have an incentive to make what could be a historic achievement. History warns against optimism—nevertheless, the peninsula remains more quiescent today, despite recent North Korean eruptions, than it has been for years. It would be foolish to lose this moment.

President Trump is not a diplomat in the normal sense of the word. Nevertheless, he made a unique breakthrough with Pyongyang. It would be unfortunate for him to leave office with the potential unfulfilled. He claims to be a dealmaker. The Korean peninsula is his best chance to prove it.