Could North Korea Use Diplomacy to Test Joe Biden's Intentions? 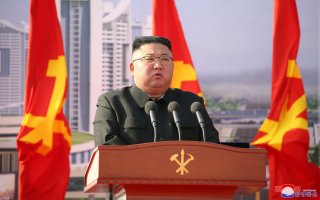 South Korean President Moon Jae-in will arrive in Washington, D.C. this week for what will be a five-day visit, during which time he will meet with a host of U.S. officials and lawmakers including President Joe Biden. The summit meeting between Biden and Moon will mark just the second such meeting with a foreign leader undertaken by President Biden since he took office, and will no doubt involve discussion of a wide range of issues including alliance management, technological and economic cooperation, vaccine sharing and distribution, and regional security issues involving both China and North Korea.

What is clear about the new policy is that it will require a heavy dose of diplomacy with North Korea if it is to successfully reduce the threat posed to the United States by North Korea’s nuclear weapons and ballistic missile arsenals. While officials involved in the review and in the crafting of the new policy have shied away from describing it as involving step by step agreements with North Korea – part of a determined effort to differentiate the new policy from the policies of previous administrations – the Biden administration’s approach appears for all intents and purposes to mandate just that. The new policy calls for corresponding exchanges between the United States and North Korea involving partial sanctions relief in return for partial steps towards denuclearization.

Currently, it does not appear as though North Korea is chomping at the bit to get back to the negotiating table. Instead, North Korea appears set to continue making progress on its ballistic missile capabilities until the United States comes along with a sufficient offer.

Still, it is possible that North Korea could see some value in an initial diplomatic foray. North Korea is still likely continuing to assess and withhold judgment on the Biden administration’s new policy, and it may determine that an up-close assessment will allow it to gauge certain critical elements of the policy.

Officials involved in developing the policy, for example, have said that the new policy will look to build on past agreements including the 2018 Singapore statement, signed by former President Donald Trump and North Korean leader Kim Jong Un. A top National Security Council official recently confirmed that the Biden administration would conduct diplomatic negotiations with North Korea on the basis of that agreement. North Korea could use initial diplomatic exchanges to test the validity of this claim as it tries to get a read on the administration and its policy.

There are a number of other critical unknowns regarding the new policy that North Korea will undoubtedly be eager to clarify. It is not yet clear, for instance, whether or not the U.S. will pursue a single larger agreement in the form of a roadmap laying out timed sequential steps towards denuclearization, or if it will instead pursue smaller incremental agreements not tied to future agreements. Additionally, it has yet to be revealed what will be included in an initial offer, as well as what the U.S. would be expecting to get in return. These are important questions for North Korea as it figures what might be available to it, as well as how much it might be able to leverage the negotiations in its favor. North Korea has in the past pocketed early gains in negotiations before walking away, and understanding how the United States intends to structure negotiations and concessions will be important for determining its ability to do so again. Finding answers to these questions could allow North Korea to make more informed strategic choices with regards to diplomacy with the United States.