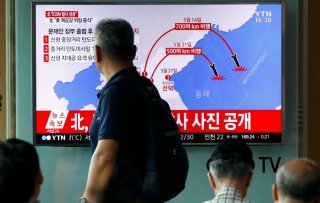 North Korea presents a potential Biden administration with some deeply complicated problems and, quite likely, a crisis to manage soon after the presidential poll in November.

No one would be surprised if Kim Jong-un attempted to generate a crisis during the presidential transition period as a way of gaining Biden’s attention, an attempt to reopen direct communications and a way to extract concessions on sanctions. Pyongyang may test intercontinental-range ballistic missiles or threaten a nuclear test.

What can Joe Biden do about North Korea? He should admit that neither Barack Obama nor Donald Trump had the right strategy. Obama’s “strategic patience” strategy didn’t amount to much more than watching Kim accelerate attempts to develop reliable nuclear weapons and missiles. Few obvious disincentives were put in Kim’s way. Trump’s audacious engagement strategy came to nothing after calmer heads in the administration concluded that the North had no intention to surrender its capabilities.

Biden starts with an empty policy cupboard: the reality that North Korea has a believable but limited nuclear capability and a porous but somewhat effective sanctions regime. Beyond these threadbare realities, I suggest that Biden should take the following steps.

First, Biden should surround himself with a bipartisan group of the smartest policy minds he can recruit, thinking through all possible options for Korean policy. We can only hope that the era of gut-instinct and real-estate videos is behind us. Let a creative brains-trust have a crack at some lateral thinking.

Second, Biden should reach out to Seoul, reassuring that America’s presence is rock solid. While he is at it, Biden should quietly but firmly bring Korean president Moon Jae-in and Japanese prime minister Shinzo Abe into a trilateral dialogue designed to help South Korea and Japan overcome their differences in the face of far bigger strategic challenges.

Third, Biden should gather the allies to make it clear that the best way to deal with North Korea is from a platform of shared allied intent. This engagement cuts both ways—America needs to understand that the allies are looking for leadership and want to confidently judge that their interests will not be undercut by random deal-brokering of the Trump variety. For his part, Biden should be clear that allies and regional friends must shoulder more of their own security burden. This is not Washington’s problem alone.

Finally, Biden should appoint a high-level representative to engage with North Korea. A direct line of communication has been opened and it should be kept open but there should be no prospect of a meeting between Biden and Kim until and if—major strides towards controlled denuclearisation happen.

So many factors could disrupt these plans. Kim’s health looks to be poor. An attempted leadership transition might already be happening. What of coronavirus? Can a nation in deep lockdown for over seventy years really keep the virus at bay? Biden may well find himself dealing with a North Korean triple crisis of an unsure dynastic succession happening during a viral outbreak and escalating nuclear confrontation. There is no easy transition to a government plan for that.

Peter Jennings is the executive director of the Australian Strategic Policy Institute and is a former deputy secretary for Strategy with the Australian department for Defence.