Critical Signs to Watch for Famine in North Korea 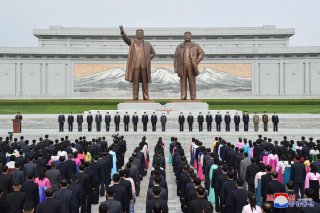 Covid-19 has not been kind to the North Korean people. Like many authoritarian actors around the globe, Kim Jong-un used the pandemic as an excuse to tighten his grip on power. Among the most draconian measures taken was the decision to put an air-tight seal on the country’s already-restricted border with China.

While the decision to close the Sino-North Korean border was intended to ward off a potentially catastrophic outbreak of Covid-19, it also ushered in instability of another kind: economic uncertainty.

In a speech before the Workers Party of Korea in April, Kim Jong-un warned of an “arduous march,” the same language used to describe a period of famine that took place in North Korea in the 1990s. The Arduous March is estimated to have taken anywhere from several hundred thousand to 2 million lives.

It is unclear whether the North Korean leader was expressing concerns over impending economic hardship or an actual famine. Some speculate that Kim invoked the language to once again blame U.S. and United Nations sanctions for economic difficulties. Others suggest that Kim is exaggerating the severity of conditions to solicit humanitarian aid.

Either option is plausible and a clear attempt at shifting blame away from the regime’s resource mismanagement toward an external cause.

Whether Kim’s use of the term arduous march is an exaggeration or not, there are indicators of famine that were observable during the Arduous March that are not observable now due to how closed off North Korea is from the rest of the world.

First, defections from North Korea are at an all-time low. According to the South Korean Ministry of Unification, only 229 North Korean refugees were resettled in the South during 2020, down from the typical 1,000 or more defectors resettled on an annual basis since the Arduous March period. The influx of refugees during the 1990s famine was an indication of worsening conditions. This dramatic reduction in defections is due principally to the Kim regime’s heightened security at the border, including shoot-to-kill orders carried out against anyone attempting to leave.

Defectors are a critical source of information on conditions inside of North Korea. Without their testimonies, it may be difficult to discern just how bad conditions are inside the country and whether a famine is taking place.

Second, sources of information in North Korea are even more limited than usual because every single humanitarian aid worker has left the country. As of March, all United Nations, NGO, and expatriate staff left North Korea, including the last two World Food Programme (WFP) staff members.

In his book The Impossible State, Victor Cha recounts how assistance from the WFP met critical needs during the famine by providing “over half a million metric tons of food aid each year” in 1995 and 1996. This level of aid continued largely unabated for many years. Now the international community cannot even look to the WFP to assess whether conditions are worsening or improving. Due to the regime’s lengthy record of resource mismanagement—spending close to a billion dollars on its nuclear weapons program in 2019 and hundreds of millions on luxury goods annually—we can safely assume that the North Korean people’s most basic needs are not being met.

Third, since the Sino-North Korea border is currently closed, the lifeline of free-market activities has likely been severed. The jangmadang, or informal markets, rely on informal cross-border trade with China to gain access to critical sources of food, money, and access to outside information.

Unlike in previous eras when ordinary North Koreans could bribe a border guard to cross into China, the Kim regime’s heightened security at the border discourages people from crossing at all lest they risk returning infected with Covid-19. The shoot-to-kill policy is not only brutal but economically damaging. One estimate from North Korea expert Andrei Lankov suggests that informal market economic activities may have at one point constituted 30 to 50 percent of North Korea’s GDP.

The inability to continue market activities may further deepen food insecurity in incalculable ways for the North Korean people. The United States and the international community should, therefore, watch closely for credible reports from inside the country for signs that famine is occurring or is on the horizon.

Severe food insecurity and economic hardship are no doubt destabilizing, and while we don’t know exactly how destabilizing they might be, the United States and its ally South Korea should always be prepared for a humanitarian crisis. Both countries should shore up humanitarian contingency plans and ensure that as they craft these plans, protection of the North Korean people’s human rights lies at the center of the strategy.