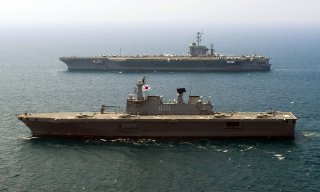 The Republic of Korea (ROK) National Assembly faces an important choice this month: will it vote to fully fund the ROK Navy’s proposed light aircraft carrier (CVX)? This decision cannot be made lightly. It will take considerable time, effort, and resources for the ROK to acquire and operate this new platform. Nevertheless, the National Assembly should give the CVX its full support. This important asset will help better address the formidable risks the ROK faces at sea far from the Korean Peninsula.

An aircraft carrier provides a unique capability for maritime powers. While airbases on land offer distinct advantages (they are easier to repair and yield higher sortie generation rates), a carrier is able to provide airpower for operations well out of range of land-based aircraft. This is vital for countries with strategic or commercial interests far from their own shores. Furthermore, carriers provide considerable versatility. The composition of a carrier’s air wing can be adjusted to operational requirements and can accommodate low- or high-intensity operations. They can provide air cover for a mobile fleet or conduct strikes against targets on land or at sea.

The CVX would offer the ROK the ability to apply airpower—either independently or as part of a coalition effort—against a range of threats to its sea lanes of communication (SLOCs) well beyond the waterways of Northeast Asia. As a trading nation, the ROK depends heavily on open and secure shipping lanes. The bulk of the exports that form the lifeblood of the ROK economy transit through the Indo-Pacific maritime commons to markets in Asia, Europe, and the Americas. The vast majority of the ROK’s energy is imported along shipping lanes stretching thousands of miles to the Persian Gulf. Any disruption of these shipping lanes by non-state actors, rogue states, or great powers could pose a considerable threat to the ROK’s security and prosperity. Land-based air power is therefore inadequate to secure the ROK’s far-flung commercial interests.

For South Korea, it is vital that the country maintain a favorable balance of power in the Indo-Pacific region. If any state were able to dominate the region, then it would pose an intolerable threat to the ROK’s security and independence. To help maintain a regional balance, the ROK must be able to bring airpower to bear in military contingencies well beyond its own shores. While some regional key flashpoints like the East China Sea are well within range of ROK land-based aircraft, the Taiwan Strait and the South China Sea are not. The ROK would be well-served to improve its ability to support coalition operations to deter and if necessary deny aggression in these areas.

One of the most common objections to the CVX program is that it is redundant because the ROK can simply continue to rely on the United States’ formidable fleet of supercarriers to secure its maritime interests abroad. But this argument fails to appreciate that the United States is increasingly overstretched and continues to call on its allies to bear more responsibility for international maritime security. While the United States remains the world’s paramount naval power, the ROK, Australia, India, and other key regional navies will need to play a more active role in the Indo-Pacific maritime commons.

Critics of the CVX program also suggest that aircraft carriers are becoming obsolete given the proliferation of anti-access/area-denial capabilities like anti-ship ballistic missiles, stealthy submarines, and long-range bombers in the Indo-Pacific region. The CVX comes vulnerabilities though. It is worth noting that the CVX will operate as part of an integrated strike group with numerous escorts to help provide for its defense. Furthermore, the mobility of carriers continues to make it difficult for adversaries to track and target them. It is also worth noting that the CVX will, as a light aircraft carrier, have smaller radar, sonar, and visual signatures than supercarriers like the U.S. Ford-class and Nimitz-class ships.

For the first time, the ROK will have the ability to project air power far from its own shores. As with every new platform, this light aircraft carrier comes with risks and costs. But given the ROK’s vital interests at sea, the National Assembly should give this program its full support.

Jihoon Yu is a commander (sel) in the ROK Navy and a professor of military strategy at the ROK Naval Academy. He is also a member of the ROK Navy’s task force on the CVX light aircraft carrier project.

Erik French is an assistant professor of international studies at the State University of New York at Brockport and an affiliated scholar with America in the World Consortium.