The Day After Kim Jong-un Dies: Will the Rule of Kim Yo-jong Begin? 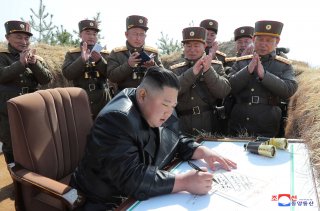 Every nation, as in every person, is a constellation of contradictions, yet North Korea is in a league of its own.

The Asian nation is the quintessential Churchillian riddle wrapped in a mystery inside an enigma. Thus, it’s really hard to know the exact conditions of the secretive country, never mind the exact health condition of its most prized member, Kim Jung-un. '

Yet, even within that limited epistemological horizon, it wasn’t too difficult to discern the physiological struggles of the country’s Supreme Leader. As biographer Anna Fifield has correctly argued, the greatest factor in North Korean politics is the fragility of its leader.

The North Korean leader is well known for less-than-healthy habits, including chain-smoking and binge-eating, likely driven by the precarity of his political position and the scale of his ambitions. This may have exacerbated predispositions, which afflicted his forefathers who struggled with their own lifelong health scares. Back in 2014, he disappeared from public view for almost six weeks, just to return with a limp.

The strain of high-stakes global diplomacy, accelerated by word wars then ‘summits of the century’ with President Donald Trump, has made life perhaps even lonelier at the helm of an improbable nuclear power. As Niccolò Machiavelli warned more than half-a-millennium ago, “there is no more delicate matter to take in hand, nor more dangerous to conduct, nor more doubtful in its success, than to set up as a leader in the introduction of changes.”

His latest surgery--that he had one--likely didn’t go as perfectly as they wished, and Chinese doctors will likely make necessary interventions to enhance his chances of recovery. But what if he doesn’t make it? Or manages to come back, but never quite the same as before.

For all its antiquated ideology and infrastructure, North Korea is among few nations on earth led by millennials, namely the Supreme Leader and his siblings, most especially the chief consiglieri, if not de facto co-ruler, Kim Yo-jong.

Whether Kim survives or comes out of his latest ordeal, she is bound to play an ever more central role in North Korean politics. In a Stalinist dystopia, oversight over propaganda departments and organization of (and access to) the Supreme Leader’s daily routine brings unprecedented powers.

One could even say there is a precedence for this. As high-profile defectors such as Jang Jin-sung, a former agent at the United Front Department of the Korean Workers' Party, have noted, Kim Jung-un’s father’s (Kim Jung-il) improbable rise to power was through control over crucial elements of the state apparatus, which have now come under Kim Yo-jong’s jurisdiction.

Kim Jung-un may have overcome ageism in traditional culture, much at the expense of his late uncle Jang Song-thaek, who was partly executed for not taking the young Supreme Leader seriously enough. His sister may overcome sexism too, although ‘femininity’ reportedly disqualified Kim Jung-un’s dashing older brother, Kim Jong-chul from the succession.

In fact, North Korea is replete with stories of strong women, including  Ko Yong-hui (the late mother of the Supreme Leader) and Kim Song-ae (second wife of Kim Il-Sung). Thus, it’s more probable than not that Kim Yo-jong’s will play an ever more central role, almost regardless of what happens to her brother.