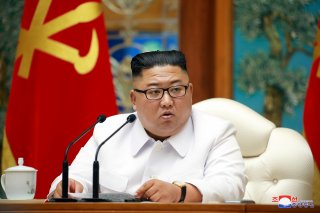 In case one needed any additional evidence that U.S. and U.N. Security Council sanctions on North Korea were failing to achieve their overall objective, look no further than the latest report from South Korea’s central bank.

For the first time in three years, the North Korean economy has registered positive growth. While a 0.4% annual increase last year (Before Coronavirus hit, keep in mind) is about as small as a postage-stamp and would be treated by another nation on the planet as border-line stagnation, North Korea’s economy is not like any other. It is, by comparison, the most heavily sanctioned economy on the planet, where imports are capped, exports are restricted, and bulk cash transfers are banned—all in an attempt to dry up the Kim dynasty’s revenue. At $32 billion, North Korea’s gross national income makes the U.S. state of Maryland look like an economic powerhouse.

To the United States, of course, the overall numbers of the North Korean economy are less important than what those numbers reflect about U.S. policy. Washington’s ultimate objective is not to bankrupt Pyongyang for bankruptcy’s sake, but rather to pile on so much financial pain on North Korean leader Kim Jong-un that he humbly takes a seat at the negotiating table and trades his nuclear weapons deterrent for economic relief. The whole purpose of the Trump administration’s maximum pressure campaign on North Korea is to accomplish what no other U.S. administration has been able to: denuclearize the North and transform the Korean Peninsula into a region free of nuclear weapons.

President Donald Trump may be a totally different political animal than his predecessors, but his administration’s North Korea policy has been an extension of prior administrations. With the exception of meeting Kim face-to-face on three separate occasions (summits that have proven to be all surface and no substance), Trump has consulted the very same policy blueprint and relied on the very same tools that Presidents George W. Bush and Barack Obama used during the previous decade and a half—slap a copious amount of sanctions on the North Korean economy to pressure the Kim regime into serious negotiations; offer North Korea a way out of the economic hell by restating Washington’s commitment to a dialogue; and propose a basic scheme that would trade sanctions relief for full, final, and verifiable denuclearization. If the North Koreans are truly hoping for a more productive relationship with the United States, U.S. officials assert, then they would start abiding by U.N. Security Council Resolutions and hand over the keys to their nuclear kingdom.

Time and again, Washington discovers that this formula is hardly a recipe for success. While the North Koreans want prosperity like everybody else, they aren’t willing to sell their security to get it. The reason for this is quite logical, even if U.S. officials don’t wish to accept it: there is no combination of concessions Washington can provide to the Kim regime that comes close in value to its nuclear deterrent. Giving up the ultimate security guarantee the North can possess in return for investment, aid, and other economic incentives are too much of an ask. The U.S. is in effect demanding that the North Koreans cancel their life insurance policy for a replacement policy whose coverage is to be named later. No sane person would accept such a deal. And as it turns out, that includes Kim Jong-un.

Instead of Pyongyang buckling underneath the economic pressure, U.N. experts monitoring the North Korea sanctions regime issue progress reports detailing the increasingly ingenious ways the Kim dynasty is shredding the export bans and banking restrictions. Whether it is through ship-to-ship transfers with Chinese barges, good old-fashion smuggling across the North Korean-Chinese border, lax enforcement from U.N. member states in Africa and the Middle East, or the selling of fishing rights to Chinese fishermen (Pyongyang reportedly made $120 million in 2018 by simply permitting foreign fishing off its coastline), the Kim regime continues to make revenue and import the fuel it needs to survive.

Lawmakers, policymakers, and the analyst community will evaluate all of this and conclude that U.S. and U.N. sanctions are not working. It’s difficult to disagree with this prognosis. But a large cross-section of this very same community will recommend even more sanctions to fill in the holes, as if the Kim regime won’t discover ways to poke new ones into the edifice.

U.S. officials need to stop burying their heads in the sand and start embracing the facts. And the facts are as clear as day. North Korea is a nuclear weapons power whether we like it or not. Every day Washington believes it can coerce the North into downgrading its status is another day more realistic policy objectives are left rotting on the shelf.